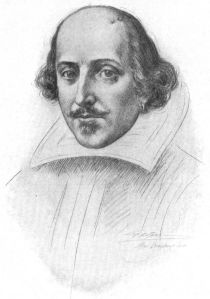 Back in 2006, I was visiting one of the most excellent Catholic families I know, and they brought ought a special item to show me.  It was a box containing CD recordings of all of Shakespeare’s plays.  An all-star troupe of actors had enacted them all, and they were performed so as to communicate the action via sound only.  (Excellent sound effects are employed.)  It is called the “Arkangel Shakespeare.”

I said at the time that if I were not a Christian man, I would have gotten down and worshipped this box of CDs as if it were a god or a talisman of consummate holiness.  As it is, I saved up my Mass stipends for a few months, and then ordered my own Arkangel Shakespeare from Amazon.  (It is also possible to order individual plays, by the way.)

So whenever I am in my car, if I am not either praying, or meditating, or rocking-out a little bit, I listen to the plays of William Shakespeare.  I have had the collection for over two years now, so of course I have listened to all the favorites of the high-school and college English classes of my bygone days:  Julius Caesar, Romeo and Juliet, Hamlet, King Lear, A Midsummer Night’s Dream, Much Ado About Nothing, both Parts of Henry IV, Henry V, Richard III, etc.

I enjoy the comedies, of course (especially Taming of the Shrew, which always makes me think of the Moonlighting spoof of it, with Bruce Willis in rare form as Petrucchio).  But I love intense drama more than young lovers getting confused or being turned into animals by fairies.  My favorite Shakespearean effect is when the action of the play feels like the slow tightening of a vice.  Because they employ this effect to perfection, my two favorite Shakespeares are Richard II and Coriolanus.

The fact is, though, that when you have a box full of CDs of every play Shakespeare ever wrote, and you have a lot of time on your hands in the car to listen to them all, you come to realize that they are not all good.

The only one I have popped out of the CD player before the first disc even got finished is Titus Andronicus.  I could not deal with someone’s tongue being cut out.  The last two times someone dragged me to a horror movie, I have fainted both times.

Shakespeare wrote not one, not two, but three plays about King Henry VI.  They are all bad; they are all boring—even though St. Joan or Arc is in them (so you know they are very bad).

Henry VIII is also inexplicably tedious.  Even though the history involved is extremely dramatic, somehow the play lumbers along so stolidly that you hardly care whether Henry gets his annulment or not.

The fact that this is Shakespeare, however, never completely vanishes.  The Duke of Buckingham does not just call Cardinal Wolsey ‘fat.’  Instead, he says:

Can with his very bulk take up the rays o’ th’

Beneficial sun and keep it from the earth.”

Keep that in reserve for when you need a good insult.  (But try not to be mean-spirited about it.)