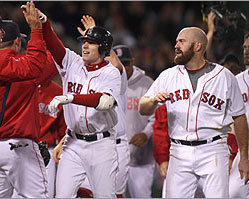 Baseball fans have every right to complain. “Father, how could you run this blog as if Major League Baseball did not exist? How could you go on and on about the Redskins and the Wizards (before the NBA season has even started), and not once mention the American pastime? What kind of sports blog is this?”

A good question. Nonetheless, I was prepared to keep ignoring Major League Baseball, perhaps for another fortnight. In fact, when the Red Sox had a pitching change at the beginning of the seventh inning last night, I turned off the t.v. It was over. Some team that didn’t even exist when I was growing up was going to the World Series to face the Phillies.

Boy, did I make a big mistake. (I am not the only one. Apparently, some of the Red Sox fans left Fenway Park at the same moment that I decided I had better things to do than to watch the dismal death of the ’08 Boston Red Sox.)

Anyway, in case you did not read your Sports’ page this morning: the Red Sox scored eight runs in three innings in one of the greatest comebacks of playoffs’ history.

One thought on “Unignorable”