Skip to content
January 19, 2009January 20, 2009 frmarkdwhite
Some bloggers seem to relish being killjoys. I do not. I am not trying to rain on anyone’s parade, especially his inaugural parade.

I googled like mad in the hopes that some better writer had already made the following points. Alas, my searches came to naught.

So I am duty-bound to make the following points myself.

At his inauguration, Barack Obama will lay his hand on the same Bible that President Abraham Lincoln used when he took the oath of office in 1861.

I leave to others the consideration of whether this is a presumptuous and grandiose gesture on Mr. Obama’s part. Or if it will be a beautiful moment when he lays a black hand on the Bible used by the Emancipator of the slaves. Neither of these is my topic.

I just want to point out the following irony involved in using the Lincoln Bible: Abraham Lincoln did not believe in the Bible.

Lincoln was a great man and a great President. I am not trying to upset anybody, or make you question my patriotism or my love for the motherland.

Lincoln was an astute student of the Scriptures. He believed them to be the product of the literary genius of mankind. He spent time reading the Bible throughout his life.

Lincoln said that he respected the faith of his countrymen who believe that the Bible is the Word of God.

But the fact is that he himself did not believe it.

“He was a great talker on the Scriptures and read it a great deal, but he never made any profession,” said Lincoln’s best friend from his youth.

A friend of Lincoln’s in his twenties said: “He always denied that Jesus was the Son of God as understood and maintained by the Christian world. Lincoln attacked the Bible and the New Testament…Sometimes he ridiculed the Bible.”

Like I said, I do not mean to suggest that Lincoln was anything less than a great man. Perhaps when Lincoln ridiculed the Bible, it was just youthful excess.

The fact remains: Abraham Lincoln never embraced the faith of the Bible. He was not a Christian. He never professed to be one. At the age of 37, Lincoln publicly declared: “I am not a member of any Christian church.” This is documented history; I am not making it up.

One DOES need to be a Christian, though, for it to make sense for you to take an oath with your hand on a Bible. 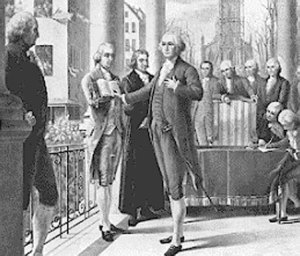 What is an oath? It is when you invoke God as a witness to certify the truth of what you say.

The oath of office of the President of the United States is a promissory oath—it refers to the future. The new Presdient invokes God as the One Who will guarantee his fidelity to his duty as President. The Constitution does not require the new President to lay his hand on anything, and it does not require him to invoke God. Nonetheless, it has become customary for new Presidents to swear to God on a Bible.

When I took the oath to become a cleric of the Church, I laid my hand on the book of the Gospels–as all aspiring clerics do–to call God as my witness and invoke His divine help. For centuries, it was customary in Christian lands for witnesses in courts of law to lay their hands on a crucifix to swear that they would tell the truth.

In all these instances of oath-taking, the object at hand (book or cross) is obviously not itself the divine Witness. The object symbolizes Almighty God because the object is directly connected with God’s Revelation of Himself in history.

If the Bible is a collection of some of history’s greatest literature—as Abraham Lincoln held it to be—then it makes no sense to take an oath on it. A compendium of good books cannot serve as a symbol of the Divine Witness of a solemn oath. You might as well put your hand on a copy of Homer’s collected works or Tolstoy’s War and Peace. It only makes sense to put one’s hand on a Bible to swear if the Bible is God’s Word.

(Right now I am not touching the question of how to understand God’s Word, how to read it correctly and profitably. This is no time to get into fundamentalism vs. the historical-critical method, etc. Regardless of such questions, I think we can all agree that one either believes that the Bible is God’s Word, or not.)

So the Lincoln Bible is one ironic little object. Taking an oath on it is an ironic thing to do.

All irony aside, I pray to God Who has revealed Himself by sending His Son, and Who speaks to us in the words of the Scriptures:

11 thoughts on “The Irony of the Lincoln Bible”