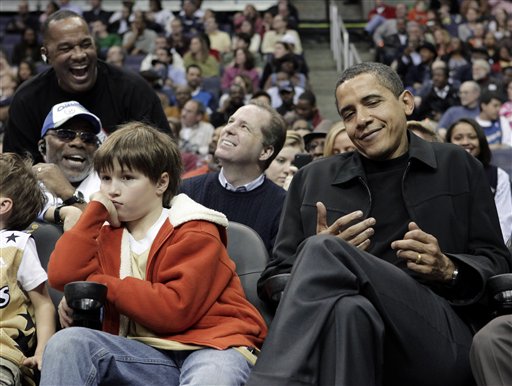 Discussion Question #1: Are the Georgetown Hoyas the most disappointing ballclub in the nation this season?

President and Bulls fan Barack Obama was at the Verizon Center this evening, as was Moses-beard-wearing Bull John Salmons.

Both were disappointed. The Wizards managed to beat the Bulls by 23 points. (Not a typo.) Let’s hope the President comes to more Wizards games!

…Not long ago, the Bishop of Wilimington, Delaware, sent his people a pastoral letter about Abraham Lincoln. The title of the letter is a quote from President Lincoln’s first inaugural address. The quote concludes with the famous phrase, “the better angels of our nature.”

Bishop Malooly acknowledges that “some aspects of Lincoln’s legacy are still controversial almost 150 years after his death,” and that Lincoln’s “religious views are in many ways obscure.”

Nonetheless, the Bishop presents Abraham Lincoln as a man of the Beatitudes and as a model of the theological virtues of faith, hope, and charity.

I mean no disrespect to Bishop Malooly or Abraham Lincoln, but I feel duty bound to point out that:

Lincoln professed to be motivated by charity in his famous second Inaugural address, which is inscribed into the wall of the Lincoln Memorial. But it is by no means clear that Lincoln was perfect in the virtue of charity.

The Catechism of the Catholic Church summarizes the criteria for justly going to war. Obviously, a ruler of perfect charity would apply these criteria with the greatest possible circumspection.

Lincoln did not declare war against the Confederacy in order to bring about the end of slavery.

We could rehearse many arguments regarding what exactly the Civil War was fought for. Nonetheless, there is no question that ending slavery was NOT the original justification for war.

Rather, the President was convinced that the South had wrongly divided the United States. In Lincoln’s mind, the seceding states had started the war by seceding from the Union.

I am no expert on this, and I hope that others will chime in.

I believe, though, that I can safely assert this: The justice of Lincoln’s cause for war turns on whether or not the Confederate States had the right to secede from the Union. 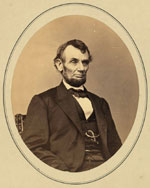 That is a question that probably never will be settled. We can, however, note the following:

1. Blessed Pope Pius IX corresponded with Jefferson Davis, President of the Confederate States of America. His Holiness addressed Davis by this title. The Pope does not enjoy a charism of infallibility for settling questions having to do with the U.S. Constitution. But the holy Pope certainly sympathized with Davis. When Davis was languishing in prison after the war, Pius sent him a crown of thorns, which the Pope had woven with his own hands.

2. Although he was imprisoned pending a trial, Davis was never in fact tried for treason. The ostensible reason the trial did not go forward is that the justices of the Supreme Court held that the Confederate States did, in fact, have the right to secede.

If the Confederate States had the right to secede from the Union, then President Lincoln’s attack on Confederate territory was unjust. Certainly, Lincoln was himself convinced of that his cause was just; there is no question of malice. But he may have erred in judgment, and thereby failed grievously in charity.

…Still hoping the Hoyas beat Villanova tomorrow–even if Georgetown is the most disappointing team in the nation.

3 thoughts on “The American Thomas More?”