He must be, right? How else could BOTH Memphis AND Duke get knocked out of the tournament on the same night! But seriously…

The wicked said among themselves: “Let us beset the just one. Let us find out what will happen to him. For if the just one be the son of God, He will defend him and deliver him from the hand of his foes. With revilement and torture let us put him to the test, that we may have proof of his gentleness and try his patience. Let us condemn him to a shameful death; for according to his own words, God will take care of him.” Wisdom 2:1-22

This reading from the Old Testament poses this profound question: Will God vindicate the man who hopes in Him?

When the just man who loves God is put to the ultimate test–when he must renounce everything for the sake of being faithful to God–will the invisible, silent, mysterious God be there? Or are the scoffers and cynics right?

For a long period of time, this was an open question. It could not be answered because there was no perfectly just man.

Job had a claim to being the test case. But in the end even Job admitted that he could not accuse God of infidelity. After all he suffered, Job repented in dust and ashes. (Job 42:6) 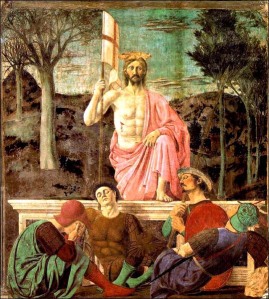 So the question went unanwered, until the just man came. In the Passion of our Lord Jesus Christ, the fidelity of God was put to the ultimate test. The plans laid out by the scoffers in the Old Testament were fulfilled when the innocent Lamb of God was led to the slaughter.

The answer was given: God vindicated the Innocent One. He rose from the dead. He ascended into heaven. He reigns supreme, the King of the Universe.

God has answered the question. His answer is Christ.