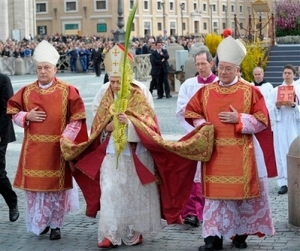 Nothing can cheer a guy up on a rainy day like a picture of the Holy Father in a beautiful cope, accompanied by Cardinal-Deacons in lovely dalmatics.

Here is a quote from a Palm Sunday sermon by St. Andrew of Crete:

Let us run to accompany the Lord as He hastens toward his Passion, and imitate those who met Him then, not by covering His path with garments, olive branches or palms, but by doing all we can to prostrate ourselves before Him by being humble and by trying to live as He would wish.

Pope Benedict will arrive in Israel in just over a month.

At this moment, the second half of the NCAA national championship is already well underway. Therefore, there is no real reason for you to believe what I am about to tell you.

The fact of the matter is, however: We here at P&BD have been saying for two days that this game was going to be another Super Bowl XXIV.

This morning, numerous parochial-school seventh graders heard Preacher predict that, “This game is not going to be pretty.” And it ain’t.