Click here for a couple of excellent posts on St. Thomas More…

…Here is a question for discussion (proposed by the great Dr. Gridlock):

Let’s say you are driving in a lane. Suddenly a sign indicates that your lane will soon cease to exist.

Probably the traffic in the lane into which you must merge is moving more slowly than you.

2) Keep driving to the bitter end of your lane, then merge?

Remember: Answer according to Christian charity. And feel free to explain your response with a thoughtful comment below.

…Here is a poem by Wallace Stevens:

The Emperor of Ice-Cream

Call the roller of big cigars,
The muscular one, and bid him whip
In kitchen cups concupiscent curds.
Let the wenches dawdle in such dress
As they are used to wear, and let the boys
Bring flowers in last month’s newspapers.
Let be be finale of seem.
The only emperor is the emperor of ice-cream.

Stevens has been called “a spiritual poet in a secular age.”

I do not agree with this. In fact, I cry out sharply, like one of the bawds of euphony. (See “Thirteen Ways of Looking at a Blackbird.”)

Wallace Stevens is not a “spiritual poet”–whatever that is. He is the greatest genius of the atheist aesthetics of the early twentieth century. As a poet, he makes T.S. Eliot look like a piker. Let’s give the insurance executive his due.

Stevens’ best poems are so stirringly evocative, they almost make you want to agree with him. But he is wrong. There is a God. There is an eternal paradise.

One line from “Sunday Morning” reads: Death is the mother of beauty.

Perhaps death is the mother of the beauty we can perceive now. But death is not the mother of Beauty, ever ancient, ever new. The eternal Beauty became man to conquer death.

Another line reads: The tomb in Palestine…is the grave of Jesus, where he lay.

But Christ does not lay in the sepulchre. He is alive, and He always will be. 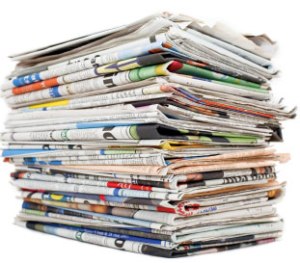 …Maybe you think this post on Wallace Stevens is random.

Our newspaper boy has a habit of not showing up for days, and then delivering all the newspapers he was supposed to have delivered. This phenomenon made me think of “bring flowers in last month’s newspapers.”

8 thoughts on “Use the Lane, Ice-Cream Emperor”