The man is incredible:

Whoever wishes to come after me must take up his cross and follow me. –Mark 8:34

This is what the Son of God said. He went to heaven after He rose from the dead, so we certainly want to follow Him.

But wait: Are we fools to want to follow Christ? To come after Him, we must take up our crosses. This is what He clearly says. We have to be clear on what He means.

The cross was the implement the Romans used to kill their worst criminals. The cross may mean many things to us, but when the Lord first used the term 2,000 years ago, the cross meant one thing: execution, the death penalty.

Among Christians, to speak of one’s crosses has become a metaphor for all kinds of difficulties. It is a good metaphor.

But: We cannot use the phrase as a metaphor if we do not first consider the literal meaning. We cannot forget what the cross essentially is. The cross is an instrument of one thing—death.

I am not trying to be morbid here. I am not the one who said, “Take up your cross and follow me.” The Son of God said it. Our Savior told us to take up our cross. 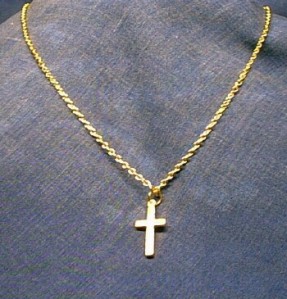 It sounds morbid, but I am not the one who made this up. God Himself became man and founded our religion. In the religion God gave us, you cannot shake a stick without hitting a cross. The sign of death is everywhere. In the Church, you cannot take a breath—you cannot turn your eyes in any direction—and not come face-to-face with death, because the cross is everywhere. The implement the Romans used to kill people is everywhere. And our Lord explicitly told us to hold fast to that very thing.

Death came altogether too quickly for a lot of our brothers and sisters on September 11, 2001, and we pray that they will rest in peace. There were many terrible things about that day, but the worst was that so many people were killed without any opportunity to prepare for death and judgment. May God be merciful to them all.

That said, nobody over the age of ten can really think that he or she is going to be able to avoid dying. Death will come. We are afraid of death; we do not generally want to think about it. Many of us try to run away from death by futile attempts to turn back the clock on age and illness. But deep down we know perfectly well: death will come.

So when Christ tells us to face the reality of death, He is not giving us a newsflash. But what He says is new. Christ’s teaching about death is a revelation, because He Himself died in an utterly unique way. Countless criminals died on crosses during the time of the Roman Empire. But no one died like Jesus Christ died.

The Lord Jesus lived a holy life of poverty, enlightenment, and love. Then, when the time came, He bowed His head to the plan of the Father. Jesus allowed Himself to be condemned unjustly by wicked men. He took the cross in His hands and carried it to Calvary without a complaint. Then He spread out His arms and asked forgiveness for the men who killed Him while they drove the nails into His hands and feet. 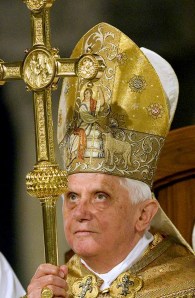 We know that the Lord Jesus did not WANT to die; He didn’t have a sick death-wish. In the Garden of Gethsemane, Christ pleaded with the Father. “Father, let this cup pass from me.” But the Savior knew what He had to do, and He was obedient unto death. “Not my will, Father, but yours be done.”

“Not my will, Father, but yours be done.” Then, Christ marched straight at the enemy. He strode fearlessly towards the thing that we fear the most. The will of the Father was: Head straight for death. Do not swerve to the right or left. Attack death!

So the Lord Jesus attacked. He loved life; He did not want to die. But He wanted above all to fulfill the Father’s plan. So He took the cross, the instrument of death. And by perfect, humble obedience, Christ turned the cross into the weapon that conquered death.

He died, He was buried. On the third day, He rose again from the dead. He ascended into glory.

So when the Lord Jesus tells us to take death into our hands and carry it, He is not ordering us to shuffle off in fear and shame towards darkness. Nor are we Christians crazy to embrace His command with enthusiasm, emblazoning everything we have with the symbol of death. Christ has given us every reason to hold the cross like a prize. It is the trophy of eternal life.