A lot of people saw the Lord Jesus after He rose from the dead. St. Paul lists some of them:

All of the people who saw Christ after His resurrection were certainly overjoyed. All of them were filled with zeal for the kingdom of God and hope for eternal life.

We owe these eyewitnesses everything: Our faith is based on their testimony. Our goal is to follow in their footsteps.

Here is a question:

Of all the people who saw the Lord after He rose from the dead—who was it who deserved to be the first to see Him?

Of course, anyone who saw Him was not about to complain and say, ‘Gosh, this is great to see Christ risen from the dead, but why did I have to wait until now? Why did so-and-so get to see Him before me?’

No—no one complained about the order in which He appeared to people. It didn’t matter if you were the first or fifth or five-hundredth to see Him. All that mattered was being an eyewitness of the Lord’s triumph over sin and death.

But the Lord Jesus never did anything arbitrarily. On Easter, sometime when the night sky was just beginning to brighten, when the first pink of day was streaking the east—at some precise moment that we cannot know for certain, someone became the first person to see the Savior Who had woken up from the sleep of death, never to die again.

Who was it? Who deserved such an honor?

Based on his tireless work for the kingdom of Christ, we could say that St. Paul deserved to be the first to see Him. After all, St. Paul wrote half of the New Testament. He traveled to the edges of the known world to spread the Gospel. He endured decades of hardship and suffering.

But St. Paul himself said that he was not the first. Quite the contrary, Paul persecuted the Church until the Lord spoke to Him from heaven.

So it was not St. Paul. How about St. Peter? After all, St. Peter was the rock on which Christ promised to build His Church. He was the man to whom the Lord entrusted the keys to the kingdom of heaven.

We also know that St. Peter was eager and impetuous. As soon as it occurred to him that the prophecies would be fulfilled by the resurrection of his beloved Master, St. Peter would certainly have run to the tomb.

But we also know that St. Peter was not exactly quick on the up-take. Also, he was burdened by his guilt for denying the Lord in the high-priest’s courtyard. Yes: The Lord Jesus would come to Peter, forgive him, and bless him for his mission as the first Pope. But St. Peter was not the first to see Christ. 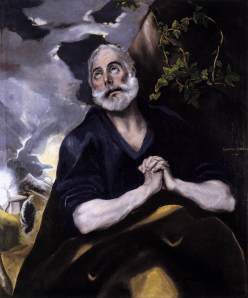 Okay—so now we have figured it out by the process of elimination. The first witness of the Resurrection was the disciple whom Jesus loved. St. John was the one who sat next to Christ at the Last Supper. He was the only Apostle who walked with Christ all the way to the top of Mt. Calvary. The Lord Jesus spoke to St. John from the cross.

But wait a minute.

Are we all a bunch of chauvinist pigs? Have we not neglected a whole segment of the population–the fairer half of the disciples? St. John was not the first to see Christ on Easter. In his own gospel, he gives that credit to someone else. We can say without doubt: The first person to see our Lord on Easter was a woman.

Among the many saints who have considered this question, there is a general agreement that the Lord certainly would have appeared first to the Holy Queen of the saints. St. Ignatius of Loyola put it like this:

Although Scripture does not state that He appeared to the Blessed Virgin Mary, still is it is considered as understood. For Scripture supposes understanding, as it is written, “Are even you without understanding?”

None of us could argue with this. Our Lady bore Christ in her womb, raised Him, loved Him more than anyone, followed Him to death, held his dead body gently in her arms, and arranged and shrouded it in the holy sepulcher. Certainly she deserved to be the first to see Him on Easter Sunday.

There is one other candidate for the honor, though. There is the woman who Scripture actually records as seeing Christ before the Apostles saw Him. This woman had grown so close to the Blessed Mother that our Lady would hardly have begrudged this other woman the honor of seeing her Son before she herself saw Him.

Who is this woman? Her life is shrouded in mystery. But we know that she saw the pure, gentle, merciful face of Jesus–and loved Him with everything she had. She is the woman who had been forgiven much and therefore loved much.

St. Mary Magdalen. May she intercede for us on Easter, the day she was up before the sun and met her Lord in the garden. Let’s pray that we may share some of her hidden Easter joy.