When St. John Vianney made his way to the remote hamlet of Ars, where he was to take up the pastorate, he had to stop a farmboy on the road to ask him the way to the town.

So if the patron saint of priests had a hard time finding his way to one country parish, imagine how I feel! I have a tough time making sure that there are clean socks in both my sock drawers. (I have a Franklin-County sock drawer and a metropolitan-Martinsville sock drawer.)

To be honest with you, the patronage of St. John Vianney poses severe challenges to us parish priests. Last week we kept the Memorial of St. Martha, the patroness of waiters and waitresses. Martha certainly lived an impressively holy life, difficult to imitate. But she did not keep a forty-year fast on two boiled potatoes a week and one hour of sleep per night, like St. John Vianney did. 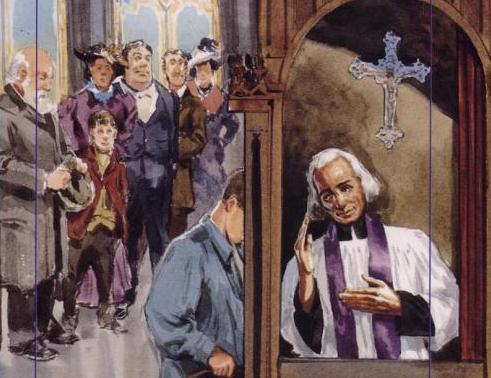 Today marks the 152nd anniversary of the death of the Cure of Ars. The room in which he died sits exactly as he left it. In fact, everything has been preserved. The little parish church still stands as it did; the pulpit from which he preached his terrifying sermons; the cramped confessional in the sacristy, where he sat to hear countless thousands of confessions. All exactly as it was, except that now the whole thing is encased inside a huge basilica.

Pope Benedict declared a special Holy Year two years ago on the 150th anniversary of St. John Vianney’s death. Again, to be frank, that ensuing Year of the Priest saw some events in my own life that drew me a little more deeply into the suffering Heart of Christ, the Heart that St. John Vianney entered so intimately with his vigils and his fasts.

But everything that happened led me here to you. So I praise God for His magnificent ways. And I thank St. John Vianney for his help from heaven. I imitate our patron in a thoroughly lackluster manner. But I hope I can make up for it with the depth of my gratitude for his heavenly help.

2 thoughts on “Short on Imitation, Long on Gratitude”