Your ways, O Lord, make known to me.

We sing this prayer in the Psalm at Mass.

Why do we keep the season of Lent? The Spirit drove the Lord Jesus out into the desert. He fasted and prayed for forty days.

The prophet Elijah walked through the desert for forty days to reach God’s mountain. Jonah gave the Ninevites a forty-day warning of God’s wrath. Moses dwelt in the cloud on Mount Sinai and conversed with the Lord for forty days. When the Lord flooded the earth, it rained for forty days.

Six weeks. Can we learn the ways of God in six weeks? Let’s get started.

In six days, God made the heavens and the earth. On the seventh, He rested. (Maybe if we study His ways hard for six weeks, then on the seventh, we will find rest.)

In the beginning, God made the land and the seas and all they contain. Then what happened? Sin. Disobedience. Estrangement from the Creator. It got ugly. Brother killed brother.

The Lord saw how great the wickedness of human beings was on earth, and how every desire that their heart conceived was always nothing but evil. The Lord regretted making human beings on the earth, and his heart was grieved (Genesis 6:5).

The innocent blood that had been shed cried out from the ground. The good world that God had made needed to be cleansed.

But this cleansing was not to end in destruction. Noah’s ark held the future in the belly of her hull. When the storms finally passed, the rainbow crested in the sky as a sign of the Creator’s love. The story continued.

The first readings at Sunday Mass during Lent outline the history of God’s dealings with His chosen nation, the nation from which His Christ would be born.

The world keeps turning and turning. Days, months, years come and go. But not in pointless monotony. Not in an aimless whimper of dissipation. No. The sacred events of history have shown the direction in which everything moves. Time marches towards a goal.

How did the nation of Israel begin? A father, a son, a grandson. Abraham, Isaac, and Jacob. Jacob had another name: Israel. He had how many sons? Twelve. Jacob’s descendants: The twelve? Tribes.

One of Jacob’s sons wandered the hills as a great dreamer. His sublime intelligence made his brothers jealous. Joseph. In their jealousy, Joseph’s brothers left him for the slave traders to take down to? Egypt.

In the end, Jacob and the whole family followed Joseph to Egypt, because severe famine befell the Holy Land. But then a Pharaoh arose who knew not Joseph. He turned the Israelites into? Slaves.

But this slavery of the Chosen People was not to end in bitterness and death. To the contrary, this was the means by which God would show forth His glory. He called a prophet to lead His people to freedom. Moses. 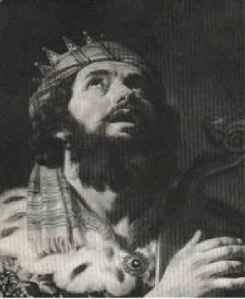 Moses led the people on their great march back home to the land that had been promised to? Abraham.

When they arrived, their resourceful, musical warrior-king brought the Ark of the Covenant to the capital city. King? David. Put the holy tent in the city of? Jerusalem. Then, King David’s son? Solomon. Built the? Temple.

And they all lived happily ever after.

No? Would that the human heart could remain in tranquil repose, in perpetual harmony with God’s will.

No, the nation of Israel sat in the Holy Land, with their Temple, like little Miss Muffet sitting on her tuffet. And a spider came along and sat down—the spider of? Paganism.

We have run a little bit ahead of ourselves here, since today we are taking a tour of the first readings for all the Sundays of Lent. But in a few short weeks, we will read how:

In those days, all the princes of Judah, the priests, and the people added infidelity to infidelity, practicing all the abominations of the nations and polluting the Lord’s temple which he had consecrated in Jerusalem.

So the Lord allowed enemies to conquer the Holy Land. They took the Chosen People into? Exile.

And that was it. It was all a sad tragedy, like the life of poor Whitney Houston.

No! Not true. While in exile, the people heard new divine promises. The prophets spoke. The Lord would come and heal all.

An Israelite Virgin would bear a son. He would suffer for the sins of the people. The Messiah, the divine Lamb, would do His work and inaugurate the? New and Eternal Covenant!