A Dominican and a Jesuit argued with each other about which founder achieved more greatness. “St. Ignatius fought the Lutheran heresy!” The Dominican answered, “Yeah. St. Dominic fought the Albigensian heresy. And have you run into any Albigensians lately?”

Pope Benedict XV celebrated the 700th anniversary of St. Dominic’s holy death with an encyclical letter. The Pope pointed out three distinctive characteristics of St. Dominic and his followers. First: love for the Pope and the Apostolic See of Rome. Second: devotion to the Blessed Virgin and diligence in praying the Rosary and teaching others to do so. And third: Solidity of doctrine.

How did St. Dominic “fight” the Albigensians? He used no physical violence. The people of southern France knew him as a gentle wanderer, willing to sell himself into slavery to save a poor man from falling into unbelief.

St. Dominic ‘fought’ the Albigensians by calmly and thoroughly explaining the Catholic religion, basing himself on the Sacred Scriptures. He patiently showed how the Albigensians’ own doctrines made no sense.

Why would God become man with a body—and die an agonizing death—if He does not love man, both soul and body? Why would God dwell in the womb of the Virgin Mary, if she were not truly His Mother? Why would the Lord have celebrated the Last Supper and entrusted His Body and Blood to His Church, if He had no intention of feeding His people throughout the ages with the sacrament?

Faith and reason united; preaching and teaching that flowed from hours of quiet study and contemplation. This is the Dominican way; this is the Catholic way.

But before we turn this into some kind of Olympic medal ceremony for the humble Spanish friar, let’s revisit a question we asked ourselves a moment ago: Have we run into any Albigensians lately? 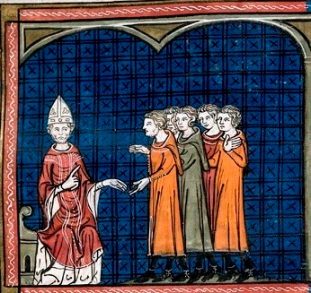 The Albigensians praised abortion. They refused to give food and water to the terminally ill–and sometimes euthanized them. They preferred temporary concubinage to the permanence of matrimony. They believed in reincarnation. They refused to believe that the God worshipped in the Old Testament is the same loving Father of the New Testament. They accepted some parts of the New Testament–and not others. They considered themselves to be the authentic followers of Jesus, Whom the Church had obscured by Her immoral sham of empty ceremonies. They hated the Pope. They insisted that faith in their doctrines was all that mattered; morals did not matter. They denied that justice could be done on earth at all; therefore, criminals should not be prosecuted in court.

Some of these things sound all too familiar to me. Do I have a calm and gentle explanation ready–for why all of these positions are unreasonable and dangerous?

St. Dominic did. Maybe, if we follow in his soft-spoken footsteps, a generation after we die, all the destructive and ill-founded doctrines of our age will have passed into oblivion. Maybe a few centuries after we die, someone will be able to make a little joke about how successful we were in lovingly standing up for the truth.