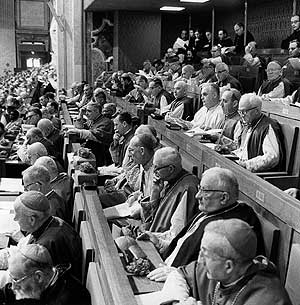 Who said I never did anything for you?

Since July, we have gotten ourselves thoroughly fired-up for the 50th anniversary of the Second Vatican Council. Plus, we have covered the teaching of two of the most important documents.

We present a handy compendium for your ease of study, reflection, etc. It will expand as we progress through the next four years.

All our many compendia, including this one, are always available to you, under the Compendia tab above.

Three Characteristics of the “Former Way of Life”

Local Yokels and Jesus Christ at the Sacred Liturgy

Opening our Ears, Eyes, and Minds

Standing on the (written and un-written) Word

God Reveals to His People

The Church = the Baptized who Believe in Christ’s Baptism

Holiness: Martyrdom (at the hands of Brad Pitt?)

Jimmie Johnson and the Priesthood of Love

Gaudium et Spes (The Church in The Modern World):

Feed the Body and Soul

Troubling Ourselves About Religion

A Beautiful Marriage = A Reasonable Marriage

1. ‘Modern Man’ Is No More. Post-Modern Man Needs Christ for Solidarity
2. Not ‘Keep Christ in Christmas,’ But Put Christ in the Post-Modern World
3. Like Gandalf and Frodo in Moria

One thought on “Compendium of Vatican II Reminiscences”