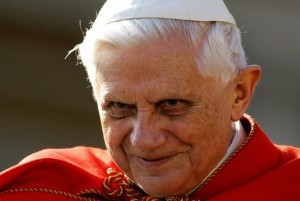 I met Pope Benedict, while he was still Card. Ratzinger, just a few weeks before the conclave that elected him to the See of Peter. Twice, fellow pilgrims and I saw and heard him at the Vatican. And I had the privilege of serving his Mass in Washington.

In fact, I hung on his every word when he came to the United States. I still think about some of the things he said then. I loved his encyclicals on charity and hope. I was eagerly awaiting the promised encyclical on faith… Instead, he invites us to an act of faith.

We know that Papa Benedetto is as gentle and as thoughtful a man as the world can boast, so he must have made such a big decision for good reasons.

Let’s pray. The Lord will of course provide. May God be good to our Holy Father, the Cardinals, and us.

One thought on “A little”