How many days since Easter?

What happened forty days after the Lord Jesus rose from the dead?

But do we have to wait until Sunday for Him to go to heaven? No. He is already in heaven. He has been for 1,980 years.

As we read today at Mass in this ecclesiastical province, according to Him, that counts as ‘a little while.’

Which counts as a little while when viewed from either of two points-of-view.

1. From the point-of-view of Almighty God, for Whom a thousand years are like one day. He began it all; He keeps it all going; He will conclude it at the perfect moment—the best-possible moment. Then, we will see exactly why history lasted as long as it did and not one second longer or shorter than it should.

2. Now, I said that there was another point-of-view from which 1,980 years looks like ‘a little while.’ 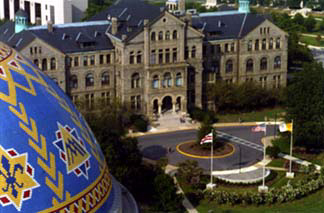 You know, a week from Saturday, our dear seminarian for this coming summer, Mr. Kyle O’Connor, will receive his Bachelor’s Degree from the Catholic University of America.

It will be a Saturday in May, the Cardinal Archbishop of Washington will be sitting with all the other assembled dignitaries on the east steps of the Shrine of the Immaculate Conception, the graduates will line up in their caps and gowns in front of beautiful McMahon Hall, and the brass pipes and strings will begin to play pomp and circumstance…

It’s all as vivid in my mind as if it were today, because I was there myself. The Dean of the College of Arts and Sciences handed me a Bachelor’s diploma, too, on a Saturday in May, beneath the inscription on the transept of the basilica, where it reads, “faith is the substance of things hoped for…”

The thing is: When that happened to me—like just yesterday, like I can still taste the cold Yuengling I drank that evening with my mom and dad and brother and aunt… On my graduation day, Kyle was three years old.

Nineteen years ago. It could have been this morning.

Which means that 1,980 years ago could have been three and a-half months ago, according to that calculus.

Lord, come back when You are good and ready! Make it today! Or tomorrow. We can wait a little while longer.

One thought on “Little While”