Three priests following in the footsteps of Junipero Serra, founder of the California missions, arrive in Los Angeles. They do battle with evil spirits in Venice Beach. They encourage Christian film-making in Burbank and in Hollywood. They pray for the salvation of all the souls who will walk the red carpet outside the Chinese Theater on Sunday.

Then: The heavens open. The droughts ends. 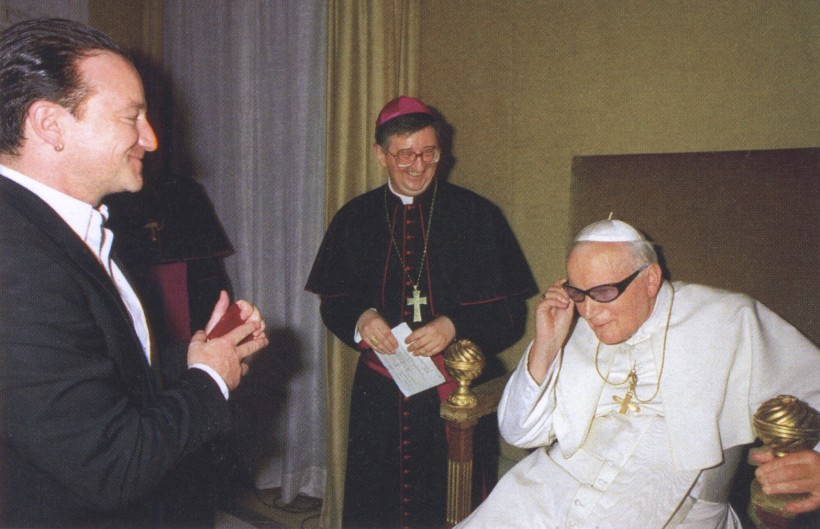 “Early morning, April 4. Shot rings out in the Memphis sky. Free at last…”

About whom does Bono sing these words?

END_OF_DOCUMENT_TOKEN_TO_BE_REPLACED

Thirteen years ago today: Future-saint John Paul II, future-Pope Jorge Bergolio, Archbishop of Washington Theodore McCarrick, and all his seminarians, including me, and a few thousand other people—all of us stood on the same stones together, embraced by Bernini’s colonnade, in St. Peter’s Square in Rome.

The sun shone. The crisp air warmed. The Pope told the men newly vested in scarlet, “Prepare yourselves for martyrdom.”

Popes tend to mark two holy anniversaries by gathering their brothers around them. In the summer, on the anniversary of St. Peter’s martyrdom, popes generally convene with all the recently appointed Archbishops of the world. And in mid-winter, on the anniversary of Peter’s assuming his authority as the supreme head of the Church, popes gather all the Cardinals, and create new ones.

The cardinals under 80 years of age had an unusual meeting last March, of course. Cardinal Bergoglio lost his chance to go home. A martyrdom of sorts enveloped him. The Lord said, after all, “If you would be my disciple, take up your cross and follow me.”

Today His Holiness gathers his Cardinals around him for the first time since his election to the See of Peter. The promise of a great springtime of witness to Jesus dawns before us.

Jesus poor. Jesus chaste. Jesus obedient to the will of the Father. All of which means: Jesus wise. Jesus serene. Jesus brimming with childlike joy. Our model, our love, our strength, our Lord.

Ad multos annos, Pope Francis! Viva! We all smile together today, shepherd and sheep, because we trust the promises of Christ. The gates of hell will never prevail against us.

He makes the sun rise and the rain fall on the bad and the good. He commands us to love your neighbor as yourself.

So: He commands us to love ourselves, by the light of God, since He loves each of us, by His own glorious light.

He loves the losers who don’t make any sense, by His glorious light of perfect sense.

So even us losers are supposed to love ourselves by the light of God.

And He commands us to love the neighbor just as much.

And Who is it Who commands all this? The Triune God. The crucified Christ. He identifies Himself especially with people who smell bad, and mumble, and can’t quite get it together.

“Lord, remember us, even though we deserve to die, when You come into Your kingdom.”

He says, “Don’t despair. For this one moment of love, you win an eternity of paradise.”

Parents, young people, all ye children of the Lord, a video well worth the watching:

The perfect law of freedom. James 1:25

Our readings at Holy Mass this past Sunday focused our attention on the Law of God. Now we read from St. James’ letter about this law.

St. James had written, “The Father of lights willed to bring us to birth by the word of truth, that we may be a kind of firstfruits of His creatures.”

‘The word of truth.’ Sounds like this word could very well be a law. Do our readings give us nothing but moralizing about keeping the Law? Duty. Submission. Law, law, law–maybe makes us think, ‘I don’t want to. But I will.’ Grudging obedience to the Big Man.

But let’s reflect a moment. We come to birth—spiritual birth, birth ‘from above,’ as the Lord Jesus put it—we come to this birth not by our own obedience, but by hearing the news that Christ has triumphed over death.

The ‘word of truth,’ the fundamental law, is Christ’s gracious gift.

For us that means liberation—the freedom for which He has set us free by His death, that we might share in His undying life. He won eternal life for us while we still languished in sin. His loving mercy, His indomitable will—not that we submit to limits, but that we thrive without limit in the kingdom of heaven—all this comes before we do anything. This is the word of truth by which we come to spiritual birth: Christ is risen.

Of course, to hear this word and to believe means submitting. It means saying to the wounded Jesus, Who loved us to the cross, ‘My Lord and my God.’

And we want to do good in return. We want to return love for love. So the Law, the perfect law of freedom, is: To love as Christ has loved us and given Himself up for us.

Our first reading at Holy Mass today comes from the letter of the Apostle James.

How many of the twelve Apostles had the name James? We talked about this in the fall. 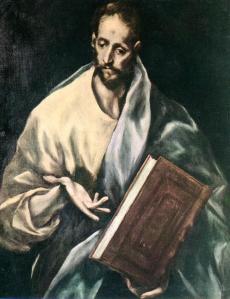 One of the St. Jameses had a brother among the Apostles, namely…John.

The other James wrote the letter in the New Testament. He served as the first bishop of a very important city, the capital of the Holy Land…Jerusalem!

In his letter to us, St. James teaches us to have faith and put it into practice.

When temptation comes—when we grow impatient, or angry, or cowardly, or deceitful, of self-indulgent—the Lord will help us overcome our weakness and act in the way that reflects who we really are, namely His beloved children.

What we have to do is pray. Spend time every day praying. When we pray regularly, the Lord trains us to love the right things.

Lord, help us to serve You faithfully! We want to get to heaven and love you forever. Give us the wisdom and strength to make the right choices, and build the right habits, that will lead us to the ultimate goal.

Anyone planning on visiting New York might enjoy reading the little virtual walking tour a friend of mine conducted over the course of a couple months, a few winters ago… [Click, and keep clicking “Newer,” if you want to read.]

I don’t know about you, but the physical similarity between these two men has left me in something of a daze.

In fact, this year we are conducting an official Cosmos + Sun boycott of the NCAA tournament. No brackets, no frenzied channel surfing, no Jay Bilas, no mid-major theorizing–no madness whatsoever.

Once anyone starts talking about a team “making its case,” we will vacate the premises. Anything having to do with the Big Ten or the PAC Ten, we will summarily ignore. The “American Athletic Conference?” Never heard of it.

…While we find ourselves on the subject of my perfectly arbitrary opinions, I would like to say that I will always be proud of Juno for choosing life over abortion, even if the prospective adoptive parents turned out to be a lot less “edgier” than she might have wished.

But can I say this? In 1990 (when Sara Bareilles was ten years old), “coming out” involved some edginess and perhaps required some courage. I have some particularly vivid college-age memories involving conversations of this kind.

In 2014, however, ‘coming out’ has become a) lame, b) uninspiring as hell, c) totally uncool, and d) altogether annoying.

I wish no one ill, of course. But, my dear people with same-sex attraction: Get over yourselves! You have become the lamestream establishment that you supposedly buck. The only hip thing to be these days is chaste. The brave people these days come out as CHASTE.

Tuesday evening I was driving west at sunset, heading home after a Richmond meeting. The Blue Ridge came into view, and I thought to myself, “Sure do love Virginia!”

As any nine-year-old could tell you, the ensuing question is, “So do you want to marry it?”

Back in my early days in the seminary, the cool people regularly harped on how His Holiness, the late Pope Paul VI, correctly predicted what would happen in the latter part of the 20th century. He warned the world about the proliferation of artificial contraceptives, that it would lead to widespread abortion, divorce, out-of-wedlock births, increased objectification and disrespect of women.

Hearing this, my budding Thomistic mind said to itself, “These were not exactly ‘prophecies’ in the strict, supernatural sense of the term. But, indeed: Humanae Vitae has some remarkably prescient passages.”

But even the great Pope could never have predicted this. Even he did not foresee that what would eventually land us in jail would be our refusal to allow two members of the same sex (!) to get married (!!!) in our churches. (Just a matter of time now till some of us go to jail over this.)

Humanae Vitae gave us what we needed to hear, in so many ways more than one. The whole business of how we come into the world makes such perfect and beautiful sense by the light of the encyclical’s teaching. Orwell’s 1984 has certainly arrived, when we read in all the papers about the “children” of two men or two women.

May it please the Lord to choose us to die in jail for the truth. The madness that artificial contraception has unleashed in the Western world can only last so long. Because masturbation–which all sex becomes, in the contraceptive culture–really is just pathetic. People who like to see the sun rise and breathe the crisp air don’t have time for it.

So the nonsense can’t last forever. But some of us are going to have to go to jail in the meantime, so let’s be ready.

The Commandments do not come from some place far away from our experience. Granted, the Lord spelled them out as a list of ten on Mount Sinai, which does seem like a long way away from here. But the tables given to Moses do not say anything which we do not, in our heart of hearts, already know. Starting with the first commandment, that we acknowledge God. Truth is, all the rest of the commandments follow from #1.

And we know, practically from the womb, that a glorious Power greater than us made all and governs all. We know that our job, our common task, our vocation as human beings bound together by our inherent social nature, is: To serve the grand designs of God as faithfully and as lovingly as we possibly can. We cannot consistently maintain any other vision of life, unless we lull ourselves into living a lie by repeated acts of self-debasement. God’s plan involves glorious goodness beyond what we can imagine. He gives us the insight and the honesty to know that we must diligently and consistently serve His plan. Humbly. That’s why we exist.

So when the Lord Jesus ascended His own mount and gave a sermon explaining the Ten Commandments, unfolding all of their profound demands, He was really explaining to us the most fundamental imperatives of our own hearts. He explained what our own consciences demand of us when we give ourselves the peace and quiet to hear it.