1. In the upper room, Christ gave us the Holy Eucharist of His Body and Blood, extended Himself with breathtakingly humble love towards His companions, and made them priests of His holy mysteries.

His gifts of divine love, of His own flesh and blood, and of the ministry of this gift: It’s all pretty clear, there at the source–on this holy night almost twenty centuries ago.

But, as centuries pass, things that started out clear can become obscured. Difficult situations can then lead to helpful clarifications.

During the fourth century, the emperor Diocletian condemned Catholic priests to death. Some priests faced the prospect of summary execution with heroic courage. Many did not; they apostasized.

When the persecution ended, some Catholics said: The cowardly priests can’t be priests anymore! A priest must be holy! Their Masses are no good!

Anyone know what this Church controversy was called? The Donatist schism. The Donatists held that the ministry of an un-holy priest is nothing, fruitless, pointless, a charade. 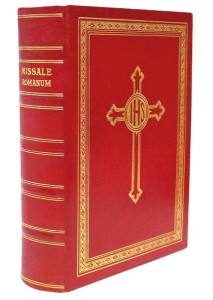 Now, a priest should always seek holiness, of course. But: If a vain, impatient, feckless, easily-distracted, oversized dunderhead priest, who hardly deserves to serve as a waterboy for a Little-League team with a losing record–if even such a priest says a Mass, as happens regularly in the Martinsville-Rocky Mount parish cluster–the bread and wine still become the Body and Blood of Christ. So long as the priest manages to say and do what’s in the book.

Anyone know what that’s called? Very important Latin phrase… ex opere operato. By the work being worked, the grace is given. The minister of the grace may be hopelessly unworthy. Doesn’t matter. It’s still the Body and Blood of God.

Which brings me to reflection #2. Dunderhead that I am, it took me a few years of actually doing it to realize what the key to “priestly spirituality” is. “The key” in my opinion, anyway.

The Lord Jesus prayed, celebrated Passover, and, as He did so, gave us the Holy Eucharist.

Always addressed to our heavenly Father, always imploring Him to send the Holy Spirit. The prayer of the Church united as one, we pray for every member of the Church, and for everyone on earth, and for all the souls in purgatory–that all of us sinners would find mercy, and get to heaven, and share the bliss of the Kingdom.

A rough summary of the Eucharistic Prayer–but pretty accurate, I think. That’s the prayer that the Church as a mother intends for the priest to say, and for everyone else to join in with an interior sacrifice of praise, thanksgiving, and petition.

The key to ‘priestly spirituality,’ I think, is… (It’s so simple and obvious, it took me, obtuse as I am, years to grasp it.) My personal spiritual task, as the priest, is: to mean the Eucharistic Prayer when I say it.

That He would send His Holy Spirit so we can feed on Him; that He would unite us and fill us with His divine love, sinners that we are; that He would draw everyone to Himself, and lead us all to the perfect life of heaven.