My dad married a Northerner. But he could hardly be accused of having been one himself. The year I turned twelve, our family spent the muggy summer evenings reading aloud to each other Mark Twain’s Life on the Mississippi. Huck and Jim already had become close friends to the imaginations of my brother and me, not to mention Aunt Sally and Tom Sawyer. 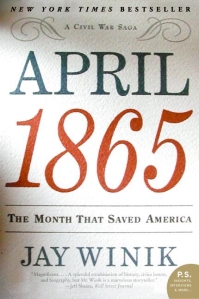 Yes, the Washington I grew up in had become the post-WWII ‘capital of the free world.’ But I never loved my hometown for that reason. I loved, and love her still, for the same reason that Robert E. Lee loved Virginia.

The land you come from deserves and demands your loyal affection, whether that particular land lies thick with trees and hedgerows or with streets and buildings. I never had any serious interest in the halls of national and international power near the places to which I delivered pizzas during high school.

Marion Barry meant more to me during the 1980’s than Ronald Reagan ever did. During the Grant administration, they debated moving the U.S. Capitol to Kansas. If they had, I wouldn’t love Washington, D.C., any differently than I do. My hometown, south of the Mason-Dixon, originally a swamp bordered by two slave states.

Just trying to explain why the month of April, 1865, fills me more with a sense of tragedy than triumph.*

Also, the end of the Civil-War Sesquicentennial, now upon us, fills me with guilt, because I haven’t paid more attention to it. And with sadness that it’s over.

Anyway: If you share any of these feelings, or if you simply seek a short, readable book with which to begin your acquaintance with Civil-War history, read April 1865 by Jay Winik.

Winik delivers the most engaging digressions I have ever read. Whenever he introduces a person or concept into the narration of the events of the eponymous month, he digresses to fill in all the necessary background information. By the time he has told the story of April, 1865, we have before us a vivid, illuminating history of the entire war.

Lincoln, Lee, Grant, and Sherman: each of them fascinate me more as individuals than Thomas Jefferson, Benjamin Franklin, and George Washington all rolled into one. Put Winik’s four—the trio on the River Queen at City Point in March, 1865, and the general behind the lines on the other side of the Petersburg siege works—put those four together into one little book, and you have as critical a mass of interesting people to read about as a reader could ever find.

Winik successfully unfolds the fact that Jefferson, et al., never really bequeathed a comprehensive plan for “the United States.” Therefore, everything hung in the balance as the Civil War ended, the entire future of the nation. The nation, as such—our nation—had not existed until then.

I agree wholeheartedly with this. Few things annoy me as much as shallow, quasi-sacral reverence for ‘the Founders,’ imagining them as prophetic sages, who somehow foresaw us just as we are now. In my book, the status of the Founding Fathers’ genius remains very much an open question. Did Jefferson possess monumental insight? Compared to a true genius like St. Augustine? IMHO: Decidedly not. 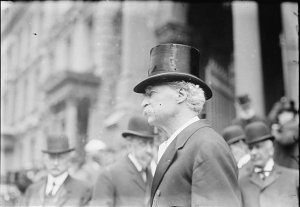 What I cannot accept is Winik’s ultimate sentimentalization of what came next. Did some great march of freedom begin then, in May, 1865, which has stretched through the American Century, and now continues to stride on, in the War on Terror? I love my country, but I do not believe so.

Winik contends that in April, 1865, a kind of miracle occurred. Instead of what history would indicate should happen—on-going bitterness, acts of angry retribution, guerilla battles raging in the mountains for another generation or two—instead of all that, peace settled on the land. Thanks largely to the greatness of the primary protagonists of the peace, the four endlessly interesting men mentioned above.

No doubt, Abraham Lincoln was a better politician than Jefferson Davis, and a better man. The North was never going to lose the war. The only way the South could prevail at all would have involved the North losing the will to fight. The armies fought each other over slavery, but the Northerners hardly had less racism in their bones than the Southerners did.

The idea that the North won because “the arc of history always bends toward justice” or towards “freedom”—not supportable by facts. Not that Winik explicitly maintains this. He just wants to sacramentalize the America that emerged from April, 1865.

Re: that peace that settled on our land (to the extent that peace really did settle in April, 1865)… Yes, we owe a debt of gratitude to the high-mindedness of Lincoln, Grant, and Lee for it. But, after all, we had a lot in common, we Americans, going into that fateful month. Not ideals from the Constitution, but: soil, language, and Christianity. Not sure that Winik really takes these common bonds into account adequately in his analysis.

Winik argues that the proto-, antebellum USA stood on the ideas in the Constitution, rather than the long-term, shared customs that generally give rise to national identity. Hence, a Civil War loomed, inevitable, all through the first half of the nineteenth century.

To me, that argument actually makes my point. What binds us together as the USA is not Jefferson’s ideas (which are rather lacking in clarity and a true foundation themselves, IMHO), but rather the following:

We have inherited the expansive propensities of Shakespeare’s English; we have a beautiful, accommodating homeland; and we never really bought into the self-righteous agnosticism of the French Revolution. English tradition, and a great ocean, isolated us from it.

I hope it doesn’t make me a bad American. I love America qua land and people, not qua constitutional republic. As shining champions of freedom on the world stage, I believe we are full of crap. But as people who love to drive on our highways and spend our money buying Cokes, I think we’re alright.

We had something in common in April, 1865—surrendered Reb and victorious Yank, speaking English, loving the land, and reading the Bible–and we have it in common now. Not ideas. When we delude ourselves into thinking that some ideal makes us altogether unique in world history, we make asses of ourselves, or worse. But when we laugh together and watch the sunset, thanking God for all we have.. Well, that’s what I love about America.

___________________
* Before classing me among the racists, please recall that Robert E. Lee knelt down next to a black man to receive Holy Communion on a Sunday shortly after Appomattox. Abraham Lincoln didn’t, nor Horace Greeley, nor Senator Charles Sumner.