Your Father who sees in secret will repay you. (Matthew 6:6)

The big-time college basketball team named after him seems always to knock on the door of the Final Four. But they never win it all. 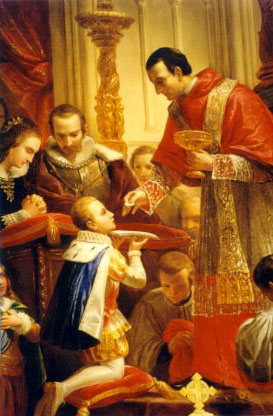 That, however, cannot be blamed on St. Aloysius Gonzaga’s lack of holiness.

Because he gave a lot of alms. He gave his inheritance and his title of nobility to his younger brother. Then he gave his very life to the sick. Four hundred twenty-six years ago today, St. Aloysius died of a fever he contracted while working in a hospital.

The heavenly Father sees things that lay hidden to our eyes. The true treasure of life lays hidden.

It makes no earthly sense, seems like a huge waste of talent and potential. But God sees things that we don’t see right now.

St. Aloysius died a few days after the Solemnity of Corpus Christi. He knew his death was coming with the great feast of the Holy Liturgy, so he kept repeating the line from the psalm, “We go rejoicing to the house of the Lord!”

The Father, Who sees what is secret, repays all our acts of generosity with the richest treasure of all, which is hidden now in the Host.