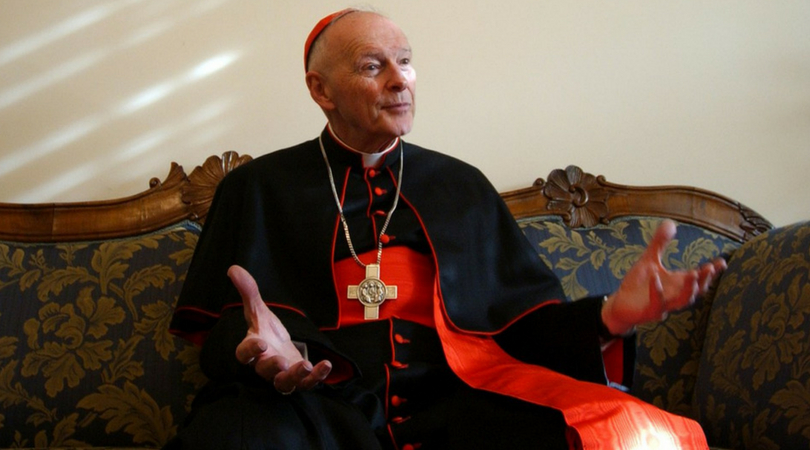 Journalist Daniel Politi has proposed that Archbishop Viganò intentionally released his testimony yesterday, on the day when Pope Francis spoke about sex-abuse in Ireland, in order to embarrass the pope. It was “timed to cause maximum damage to the pontiff.” Others have expressed a similar opinion: malice governed Viganò’s choice of release date.

But a published interview with Archbishop Viganò contradicts that interpretation. Italian journalist Aldo Valli spoke with Viganò: Ha deciso per domenica 26 agosto perché il papa, di ritorno da Dublino, avrà modo di replicare rispondendo alle domande dei giornalisti in aereo. He decided to publish on August 26 because the pope, at the press conference on the plane returning from Dublin, would have the opportunity to respond.

The Archdiocese of Washington released a statement today, responding to Archbishop Viganò’s testimony. Viganò had called Donald Cardinal Wuerl a shameless liar. Cardinal Wuerl knew, Viganò insists, that Pope Benedict XVI had imposed a sentence upon then-Cardinal Theodore McCarrick in 2009 or 2010. McCarrick was not to live a public life, but rather retire to prayer and penance.

The Archdiocese of Washington states:

Cardinal Wuerl has categorically denied that any of this information was communicated to him. Archbishop Viganò at no time provided Cardinal Wuerl any information about an alleged document from Pope Benedict XVI with directives of any sort from Rome regarding Archbishop McCarrick. [emphasis mine]

Thing is, you can read and re-read Viganò’s dossier, and never find any reference to any document regarding the sentence imposed on McCarrick by Pope Benedict. Viganò alleges no document. Viganò’s account of the imposition of the sentence involves only spoken conversations. Cardinal Wuerl has categorically denied something that Archbishop Viganò never alleged in the first place.

Archbishop Viganò recounts how an Indictment Memorandum was sent by his predecessor as U.S. Nuncio, Pietro Sambi, to the Vatican in June of 2006. It included the testimony of a former priest of the diocese of Metuchen, NJ (who also ministered in Charlotte, NC). The former priest indicted McCarrick for immoral sexual acts with himself and other priests and seminarians.

Viganò’s account here has a mysterious little hole. He recalls that Sambi’s memo to the Vatican warned that the former priest might go public with his information if the Holy See did not act swiftly. According to Viganò’s account, the Holy See did not act swiftly. Pope Benedict did not punish McCarrick until 2009 or 2010. Viganò refers to this as an “incredible delay.” So what about the former-priest going public as he threatened?

The hole can be filled with a quick internet search. Earlier this summer journalist Matt Abbott wrote about how he tried to make a public stink about McCarrick in 2006, and one former-seminarian agreed to go on the record at the time.

In 2008, the late Richard Sipe published his “Open Letter to Benedict XVI,” to which Archbishop Viganò refers in his account. Sipe claimed to have documents proving McCarrick’s abuse of seminarians. Then in 2010, Sipe published quotations from these documents–the 2006 confidential settlement between the diocese of Metuchen and a McCarrick victim–in an essay called “The Cardinal McCarrick Syndrome.”

In other words, Viganò’s narrative checks out here. There is a record of the information being made public after the threat.

Viganò makes broadside attacks against many churchmen in the latter part of his testimony, with no evidence offered to support his attacks. His dossier would certainly be more credible if he had left those indictments out.

But none of that touches the central question: Is his narrative about the Holy See’s dealings with Cardinal McCarrick true?

The most-prevalent criticism of Viganò’s veracity runs along these lines:

The conclusion does not follow from the premises. The fact is: penalties imposed by ecclesiastical authority have only one coercive mechanism: conscience. It is actually 100% believable that McCarrick flouted Pope Benedict’s discipline. And since only the most-senior prelates would have known about the penalty, no churchmen could, or would, do anything to hinder McCarrick’s flouting of it.

At a transtion of bishops, the outgoing bishop would customarily hold the bishop’s crozier until the moment comes for the Nuncio to hand it to the new bishop. There is a story about Pietro Sambi trying to keep McCarrick from holding the crozier at the installation of Donald Wuerl as Archbishop of Washington, in the summer of 2006. This would have been before Pope Benedict imposed a punishment, but after Sambi first learned of McCarrick’s sexual abuse of seminarians–as we now know, thanks to Archbishop Viganò.

McCarrick held the crozier anyway. Sambi apparently did not choose to wrestle with another clergyman in the sacristy. The same choice would have faced any other churchman who knew about McCarrick’s penalty and saw him flouting it.

When the National Catholic Register published Viganò’s dossier, the accompanying article included a remarkable statement: The Register has independently confirmed that the allegations against McCarrick were certainly known to Benedict, and the Pope Emeritus remembers instructing Cardinal Bertone to impose measures but cannot recall their exact nature.

The reporter is Edward Pentin. Someone other than Viganò told him that Pope Benedict remembers the affair and confirms what Viganò has written.

My impression is that Archbishop Viganò has a fairly obvious agenda, and he belongs to a faction that has distrusted Pope Francis since 2013.

My mom will swear that right before I had to go back to the church to hear confessions, on the afternoon of March 13, 2013 (Eastern Daylight time), when we sat watching tv in my living room, with the new pope waving at the crowd from the loggia of St. Peter’s, I said: “He is not up to this. This man has no joy. He is not up to this.”

So I guess I belong to that faction, too.

But I cannot see how any fair-minded reader could regard Viganò’s testimony as fundamentally suspect. It is enormously illuminating. He has given us a gift.

Pope Francis told the journalists on the papal plane to investigate Viganò’s claims themselves. One of them had just done that, by asking the pope to confirm or deny Viganò’s account of the conversation Viganò says the two of them had in June of 2013.

So the Pope urged those journalists to do something. And simultaneously refused to help them do it.

Viganò insisted in his dossier that a former nunciature official would confirm Viganò’s account of a stormy meeting between Sambi and McCarrick–presumably the meeting at which Sambi told McCarrick that Pope Benedict had ordered him to retire from public life and beg God’s forgiveness in private. The official has confirmed Viganò’s account, as Viganò said he would.

But this does not really prove anything. Neither Viganò, nor this official, even claim to know for sure what Sambi and McCarrick were discussing when they apparently yelled at each other. We just know the fact that they yelled.

Will Pope Benedict speak? Will he confirm that Pentin correctly referred to him as a corroborating source for Viganò’s account? (Cardinal Giovanni Battista Re could speak, also, or Cardinal Tarsiso Bertone–and make the same confirmation.)

In ‘Church World,’ in the Catholic Media Shadow House, everyone seems to think of such a thing as some kind of almost-unthinkable taboo. In the real world where the rest of us live, it would seem to be the one obvious, necessary thing that has to happen next.

Or, even better: Let us hear from McCarrick himself. I know the man pretty well. And I can guarantee that if he had a microphone in front of him and a good-looking reporter asked him to comment on Viganò’s dossier, the ex-Cardinal would damn himself and a lot of other people (who apparently deserve to be damned) within three minutes.

2 thoughts on “Believing Viganò about McCarrick”