[I cannot preach at Holy Mass because bishop has a. suspended my priestly ministry and b. locked me out of the church. But if I could give my people a homily this Sunday, I would say this…] 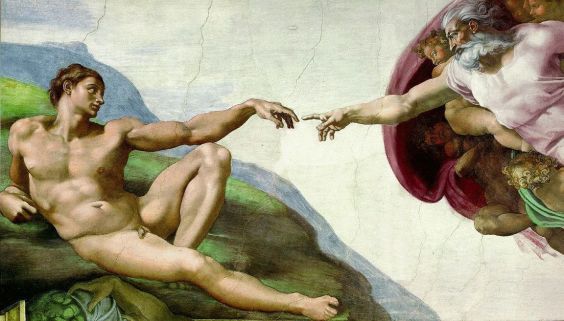 When God created the human race, He did it with fatherly love. Adam and Eve had no human parents. But they were not orphans. Their heavenly Father provided for them in every way. [Spanish]

Then we, the human race, let Satan turn us into orphans. He led us away from God our Father.

Now, I think we have all heard of parents who say, “We’re not going to raise our child in any particular religion. We will let our children decide about their religion when they grow up.”

Let’s acknowledge that, from a certain point of view, this makes sense. A baby is his or her own individual, with at least some fundamental rights. Especially the right to life, of course.

But hold it. Isn’t there a great deal more to the story of who I am than what I myself have decided? When I was sixteen years old, I wanted to sleep until noon on Sunday. But my mom did not leave me orphaned. She called me in plenty of time for church. If I didn’t get out of bed right away, she lifted up the covers and poured ice-water down my back.

So, fellow Americans, grateful as we are for our precious heritage of respect for individual rights, let’s have the courage to face some aspects of our lives that don’t involve options and free choice. After all, ironically enough: None of us can claim an individual right to our American heritage of respect for individual rights. We have only received that heritage as members of something bigger than ourselves, as a part of a national tradition that we did not invent or choose. We received it as a birthright, as the gift of our forebears.

Hence: the inner contradiction of the American mind. On the one hand, we think: The worst thing is when someone tries to take away your freedom. Nothing is worse than being forced to obey something you don’t agree with! But on the other hand, we know that isn’t really true. Losing one’s precious independence is not the worst thing. The worst thing is: being left an orphan. Being left with no heritage, no identity at all.

Our heavenly Father has not left us orphans. The pilgrimage of Jesus on this earth has revealed that the Father loves us with the same love with which He loves His only begotten Son. And of course our heavenly Father wants us to be free; He protects our individual rights like no one else does.

Parents who treat religion as something optional, something for adults to choose or not to choose: they imagine a totally self-determining child. Theoretically, the child should get to decide everything. But, in fact, such a child is left with no birthright, no heritage, no identity.

The children of God, on the other hand, accept with pride and gratitude the million and a half things that we didn’t decide and can’t decide. We know we don’t have “freedom” to determine who our parents are, or where we come from, what language we learn as our native tongue. Much less do we ourselves decide whether or not we will eventually die and go to meet the infallible divine Judge. No one has the individual right never to die.

We struggle to obey our heavenly Father’s law and His Church’s teachings; we humbly confess and ask pardon when we don’t. And each of us acknowledges that even my own distinct individuality is not really “mine.” God has given it to me, as something to use to give Him glory.

6 thoughts on “Given a Father”