[published here at the request of the author]

A Letter, to anybody and everybody,

My name is EmilyMarie Anderson and I am 18 years old. Tonight, I sat in the dark thinking about my priest alone in a house that he has essentially been locked into. I thought about my best friend’s letter which our Father put out onto his blog. This isn’t going to be as eloquent, but I have a few things to say.

This is your “troublesome priest:”

I began my journey into the Catholic world at around 16. I was raised Baptist, and had a lot of uneasy feelings about the Catholic Church. This was a church with a leader that they treated like God. They prayed to dead people and worshiped statues… (Or so I thought.)

But my heart felt alone. I knew there was more than the Baptist world. In the Baptist world, you go to a super-long service, involving big songs and the longest sermon you can imagine. When you walk in there, you’re loud and you’re talking. When the pastor makes a point you yell out ‘Amen’ in a country accent. At least, that was my church. My church had an orchestra and all these colored lights. The songs were long, with key changes and solos. To describe my Baptist church in one word: extravagant. 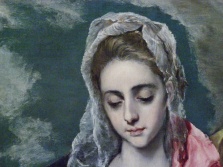 In all of that, I felt so alone. As I grew closer and closer to God, I just felt like there was more. Where was I to find it?

So I did some digging with the people I knew and I emailed this guy, Mark White. I sent him this huge email about what I was feeling. I told him that I wasn’t going to convert to Catholicism most likely, I just wanted to know what was true and what wasn’t.

I remember my excitement when he replied, and he told me the facts. He said something along the lines of “you must have a lot of faith in God to email a Catholic priest.” I’m sure he meant I was reaching far out of the comfort zone of the Baptist church, into the unknown.

But I felt it differently. It was difficult. It was difficult to reach out to a Catholic priest. I could only imagine what my family would think. I was so scared his next email would be for me to meet him somewhere, and that is the honest truth. I was so worried that I was talking to a child molester.

I grew to trust him extremely quickly. He wasn’t one of those priests. This man kept up an email conversation basically up to the present. He would email me back with the utmost thought-provoking, encouraging answers about a week after I sent him an unimaginably long list of questions.

Somewhere along the journey, I felt comfortable calling him Father. Not only because I had fallen in love with the Catholic Church (through his guidance and ever-knowledgeable answers), but because that is simply what he was to me. I was able to confide in him. He understood my worries about joining the Church. He understood my love for the Church, my joy in finding this insane universe I didn’t realize had existed. He was and is a dad to me. A father.

So the Church turned out not to be the Satan-infested hole I thought it was. But there was one more thing that stuck with me… What about this abuse scandal? My parents and I were having a hard enough time navigating this change in our lives without hearing news about the Big Bad Catholic Church on the car radio. 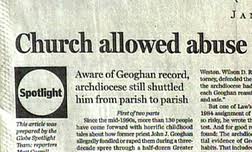 I learned how to defend the Church in every other way. Why Mary? I got you! Why Confession? I can explain! What’s up with Communion? Well if you look right here in your handy-dandy Bible…

But then there’s this one; “So, what about the abuse scandal?” What on earth am I supposed to say to that?

My basic spiel is “God gave authority to the Church to make doctrinal decisions that were directed by Him. But ultimately, the Church is made out of people. People make mistakes.” Okay, simple enough. Now comes the, “But didn’t the Pope, like, try to cover everything up?”

Where do we go from here?

My priest, Father Mark, helped me make sense of this. I don’t have to support the covering-up of bad stuff. I don’t have to love those mistakes. I can hate the mistakes and love the Church. Remember the whole hate the sin, love the sinner thing? Our God is so amazingly wonderful that He can love us so much that He hates the thing that hurts us without hating us. That’s what we are called to do, right? Hate the thing that hurts us without hating the people who caused the hurting?

I had it all sorted out. I was going to be Catholic, and I knew what to say when people asked the dreaded question involving the scandals. I started going to Mass.

There he was. He walks in, in his big old Catholic robes. He is celebrating God. You can see it, as he walks in, as he bows down. He takes his glasses off when he isn’t speaking, and he looks slightly up, as if he can see God a little better that way. He smiles just a little bit here and there throughout the Mass, as if this is the true delight of his soul.

That’s your “troublesome priest” folks. The guy who got someone else to tell me that he was going to be at the other parish during my Confirmation, because he didn’t want to let me down. The guy who replied to my endless emails within a week. This goofy man has no ill intent. He loves the Church. It is almost funny to think that anyone could see this man and think he was committing some horror, especially against the Church.

The good Lord has a reason for this; everything is a blessing. So I beg everyone who sees this to look inside themselves and ask God to make good of what is bad. Heal the Church. God’s will be done.