The following year, the pope published a book, The Name of God is Mercy.

On Ash Wednesday, 2016, the pope dispatched “Missionaries of Mercy.”

McCarrick referred to his dealings with the Holy See over the course of the previous decade. The Vatican had attempted to get McCarrick to disappear quietly from the public stage. McCarrick had not co-operated with the cover-up scheme.

But in his March 8, 2016, letter to Cardinal Parolin, McCarrick offered to “retire to a holy place and pray for the salvation of my soul, instead of wandering around the world.”

The pope already knew that McCarrick stood accused of abusing his authority to force seminarians into his bed. Archbishop Viganò, as well as Cardinal Becciu, had alerted the pope to McCarrick’s predations. The Vatican file contained testimony about McCarrick forcing a seminarian to put on a sailor suit and get into bed with him.

“Maybe McCarrick could still do something useful,” the pope said.

[All of this is documented on pages 429-430 of the Vatican McCarrick Report.]

In September of 2018, I published an open letter to Pope Francis. (Before McCarrick was laicized through a secret procedure.)

Holy Father, you have spoken over and over again about the primacy of mercy. You misinterpreted what the moment demanded. For over a generation, no one has had any doubt that the Church knows how to act with mercy. The obvious problem we have is: the Church has forgotten how to act with severity. How can you not see that your former-Cardinal-Priest Theodore McCarrick has–in his brazen recklessness–exposed this colossal weakness?

Do you not see how desperately the Church needs a severe father right now? A fearless and exacting enforcer of rules. A man whom sinners behold, and tremble. 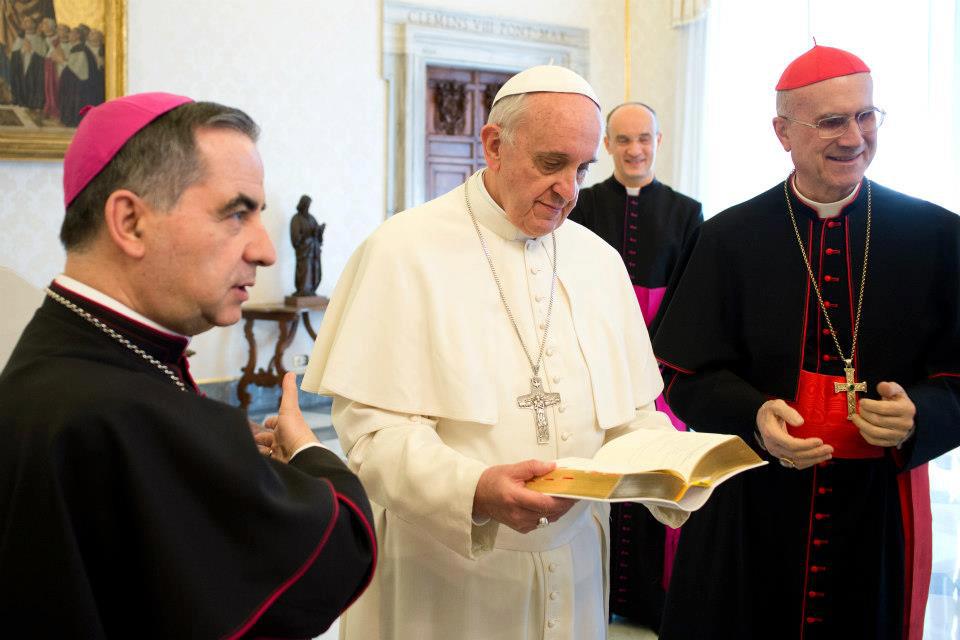 In his letter announcing the change, the Holy Father wrote.

In the past, great damage was done by a failure to appreciate the close relationship existing in the Church between the exercise of charity and recourse — where circumstances and justice so require — to disciplinary sanctions.

This manner of thinking — as we have learned from experience — risks leading to tolerating immoral conduct, for which mere exhortations or suggestions are insufficient remedies. This situation often brings with it the danger that over time such conduct may become entrenched, making correction more difficult and in many cases creating scandal and confusion among the faithful.

For this reason, it becomes necessary for bishops and superiors to inflict penalties. Negligence on the part of a bishop in resorting to the penal system is a sign that he has failed to carry out his duties honestly and faithfully.

You’re welcome, Your Holiness. For the idea.

Allow me to point out, however, that you accuse yourself with your own words.

You were McCarrick’s bishop, his priestly father in God. From 2013 onward, only one man on earth had authority over Cardinal Theodore McCarrick.

You were negligent. You failed to carry out your duties honestly and faithfully, just like Popes Benedict XVI and John Paul II failed to do, before you.

Another person who deserves a big apology from the mitered mafia: Father Lauro Sedlmayer.

McCarrick abused his authority over Father Sedlmayer during the 1990’s, to obtain sexual gratification from the young, naive, foreign-born priest.

Sedlmayer tried to denounce McCarrick for his crimes. In response, the Diocese of Metuchen NJ and the Archdiocese of Newark proceeded to sue him in court.

On May 17, 2013, two months after Francis became our pope, the then-Bishop of Metuchen Paul Bootkoski wrote to Father Sedlmayer. The bishop insisted that Father had “violated Cardinal Theodore McCarrick’s rights.”

According to Bootkoski, Sedlmayer had “calumniated” McCarrick, because Sedlmayer publicly referred to McCarrick as a “predator.”

Bootkoski went on to stipulate in his letter: Sedlmayer could not continue in ministry as a priest unless he underwent intense supervision, therapy, and “spiritual direction.”

The Vatican knew perfectly well that calling McCarrick a “predator” did not involve calumny, or a violation of McCarrick’s rights. When Father Sedlmayer blanketed a parish parking lot with fliers calling McCarrick a predator, he spoke the truth, with justice.

The Vatican had more than enough evidence in hand to vindicate Father Sedlmayer in his accusations against McCarrick.

What did they do?

While a bishop mercilessly persecuted a priest who spoke the truth about Theodore McCarrick, the truth that they knew full well?

Nothing. Nothing at all.

In 2016, Bishop Bootkoski reached the normal retirement age, and the pope accepted his resignation, without any reference whatsoever to McCarrick, or to Father Sedlmayer’s decades of suffering at the hands of prelates who abused their authority.

Would they be doing anything at all at the Vatican, about McCarrick, now? Except that circumstances outside their control forced them to do something?

Last week’s revision to the Code of Canon Law changes canon 1395.3, which defines a crime, namely: A clergyman forcing someone to perform or submit to sexual acts by force or threat. The revised law adds the phrase “or by abuse of his authority.”

The pope first introduced that phrase into the rules in May of 2019.

I pointed out then:

I guess we could call this “The McCarrick Law.” Apparently, he clearly abused his authority to get sex. After all, the pope convicted him of breaking this law (even before it was on the books) in a summary administrative procedure, without a full trial.

But: If it was as clear as all that, why wasn’t McCarrick convicted by Pope Benedict, back in 2006? We generally regard Pope Benedict as a sober, upright man. Why didn’t he recognize a case of criminal abuse, if the matter was so crystal-clear?

McCarrick ordained me a transitional deacon 18 years ago today [May 13, 2019]. On that day, I thought of him as an amazingly talented, crushingly self-centered, charming tyrant. He gave the Archdiocese of Washington a huge amount of energy that it had not previously had. He appeared utterly uninterested in anything having to do with theology. He was a flawed man. He was no walking demon.

On May 13, 2001, many churchmen, who we then regarded as at least somewhat reasonable–including Pope John Paul II–knew something about McCarrick’s sexual life. They had not concluded that his actions amounted to crimes.

My point is: I think anyone who has ever served in the military knows: The line between criminal abuse of authority in a sexual relationship, on the one hand, and a consensual affair, on the other: by no means crystal-clear.

In Shakespeare’s Macbeth, both Macbeth and Lady Macbeth do grave evils. Who convinced whom to do them? Did Macbeth abuse his authority over his wife? Or did she seduce him into committing murder–to satisfy her ambition? The answer is: Yes.

Criminal laws on paper accomplish nothing without competent investigators, prosecutors, defense attorneys, judges–and principles of application of the laws, based on acquired experience. Pope Francis has given us: the paper. We don’t have the rest.

4 thoughts on “You’re Welcome, Your Holiness”