Did you know that the Roman Rite of the holy Catholic Church admits of particular local uses?

In other words, some priests are allowed to include ceremonies as part of the Catholic rituals that express the faith in a distinctive way. One example: Franciscan priests of the Holy Land are allowed to carry a life-size replica of the body of Christ in a procession on Good Friday. These particular uses must of course be approved by the authority of the Church.

Ashing-up a lot of people’s foreheads today has inspired me to work on a particular set of ceremonies, which I will entitle the “Memento Mori Use.” If approved, I will put the ceremonies into practice someday… 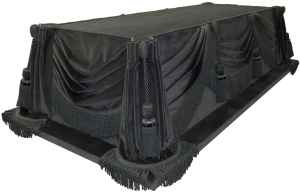 –Christmas Mass in a black vestment? Christ was born to die, my friends.

According to the Memento Mori Use, a catafalque will be kept in front of the altar at all times, flanked by six candles.

The only difference between a funeral Mass and a daily Mass will be: at a funeral, the catafalque will support an actual occupied coffin. At all other Masses, the faithful will meditate on the fact that someday a funeral Mass will be said for each of us, and it will be just like this Mass.

The catafalque will figure prominently in the administration of all the sacraments in the Memento Mori Use. After a child is baptized, the baby will be placed on the catafalque, and antiphons will be sung reminding all present that we are born to die.

Memento Mori Use catechesis will require memorizing the Creed, the seven sacraments, the Ten Commandments, the Our Father, and the Dies Irae. (Parts of the Dies Irae will be chanted at all liturgies.)

M. M. confirmands will approach the Bishop wearing full-length black scapulars. Confirmation names will be chosen from among the Christian names of dead relatives. Before administering the sacrament, the bishop will stand beside the catafalque and encourage the young people: “Remember that you have your whole life on earth in front of you! And it is, in fact, very short.”

At weddings, the couple will kneel in front of the catafalque before exchanging vows, and the celebrant will invite them to meditate on this question:

“Do you really think it is necessary to get married?”

In the Memento Mori Use, the priest will frequently stand before the altar holding a skull, and the faithful will process up the aisle and pause briefly to gaze upon the skull. M.M. Catholics will all try to make a pilgrimage to the Holy Sepulchre.

The Memento Mori faithful will process through the cemetery not just once a year on All Soul’s Day, but on every Sunday. Boy Scouts in M. M.-Use-parish troops will earn merit badges by constructing their own caskets. Memento-Mori Catholics will generally prefer to sleep each night in their own caskets.

Memento Mori Catholics will be the most joyful of all the faithful, because the repeated ceremonies of the Use will have made death a friend and removed all fear.

What I am going for is a perpetual liturgical experience which will make the Ash Wednesday exhortation of, “Remember, man, that you are dust…” seem like the friendly greeting that, in fact, it is.

Because we are not long for this world, people.

[Thanks to M.J.P. for helping me work out the details.]

The Lord Jesus said: “I am the Bread of Life.” And He gave us the Holy Eucharist.

The Blessed Sacrament of the altar is the source of eternal life. It is the divine Body and Blood, the flesh animated by the undying life of God.

How do we mortals share in Christ’s immortal life? Through His death.

END_OF_DOCUMENT_TOKEN_TO_BE_REPLACED

Here is an aspiring Shakespearian giving us a worthy rendition of the speech, web-cammed from his little kitchen: