We say that God is love, that love pours out infinitely from the bosom of the Creator and Father of all.

We say that God’s love moves us to love, to think first of our neighbor and only secondly of ourselves. To let ourselves get lost, really, in the rough and tumble of paying attention to other people and how we can help them. We forget ourselves, lose our egos like a set of keys—and then we wind up finding ourselves again at the end of the day, when we’re ready for an honest night’s sleep after spending our strength doing our duty to others. 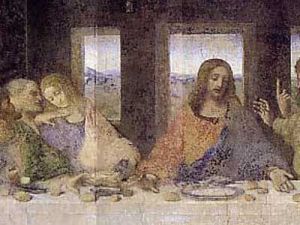 We disciples of Christ say that a bottomless spring flows with love. We drink from this fountain, and the invisible, spiritual water is holy and divine and makes us capable of doing things that the world deems impossible, like not being selfish all the time.

Now, how do we know all this? How do we know that the river of love never runs dry, because God Himself loves, and loves infinitely?

After all, someone might ask us: If God is love, why do people die, and when I don’t want them to? Why do good people get diseases? Why do liars and cheaters prosper, while the honest man can’t even afford to pay his taxes?

END_OF_DOCUMENT_TOKEN_TO_BE_REPLACED

In the Passion narrative, people fuss and bother a great deal about who exactly Jesus is.

Is He a Galilean revolutionary?

The King of the Jews?

Meanwhile, the Lord appears singularly uninterested in this question.

To the contrary, He focuses on others.

He gives the Apostles the Holy Eucharist.

He settles their dispute among themselves about who is the greatest.

He tells Peter how he will betray his Master, then forgives him ahead of time.

Christ tells the Apostles to stay awake—again, for their sakes—then wakes them up when they fall asleep.

To the authorities and interrogators who will listen, He tries to point out the dishonesty into which they have fallen.

He comforts the wailing women.

And He pardons the repentant thief and promises him eternal life.

Short summary of the Passion of Christ:

His accusers focus on who He is; He focuses on everyone else.

But, of course, we do not testify to Him for His sake. He does not need us to settle the question of Who He is.

He has always known perfectly well.

No, we testify to Him for our sakes. It does us good to focus on Christ; we lose ourselves if we don’t.

But He is focused on us. By dying on the Cross for us, the Creator of all things has revealed in-full His fundamental rationale.

His rationale for everything– 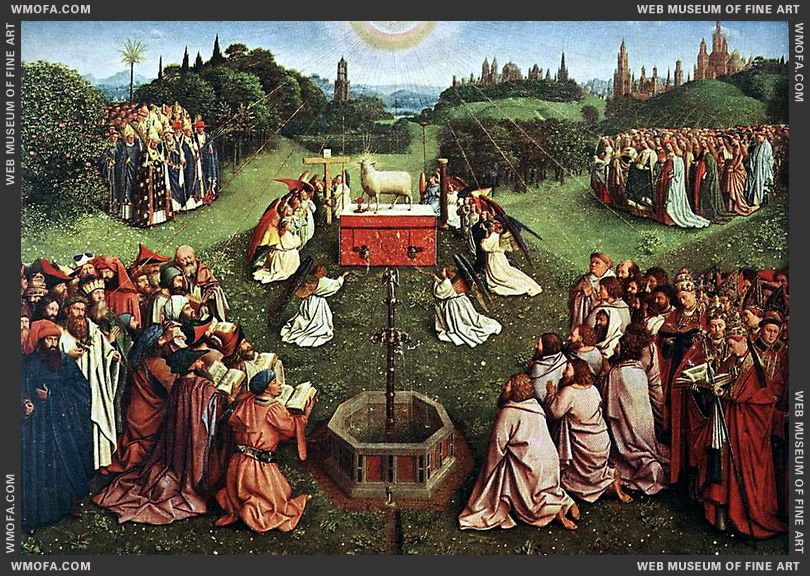 We must consider how to rouse one another to love and good works, not absenting ourselves from the assembly, but encouraging one another. (Hebrews 10:24-25)

The assembly. The Apostle has just gotten through explaining how the ancient sacrifices, offered in the Temple according to Moses’ prescriptions, do not effect definitive peace and reconciliation with God. Rather, these sacrifices were instituted solely to foreshadow the truly pleasing sacrifice, the offering of the one, true priest of Melchizedek’s heavenly order, namely…*

The holy assembly, from which we must not absent ourselves—this assembly convenes for one reason: to participate in the one offering that consecrates.

Moses designed the ancient Temple after the pattern of the vision of heaven which God granted him to see. Our assembly, the assembly to which St. Paul refers—this assembly convenes not in Jerusalem, Israel, but rather on the threshold of that original Jerusalem—Jerusalem, Heaven.

Now, some have the custom of absenting themselves from this assembly. We can’t very well blame God for that, and it would be un-Christian to judge others, so I think we have to blame ourselves.

Others absent themselves because I have not helped them to want to participate like should have. I have been overbearing when I should have been lighthearted. I have held my tongue out of fear when I should have spoken courageously out of love. I have secretly betrayed my own principles, and that betrayal has publicly shone forth in my lackluster, uninspiring behavior.

The sacrifice around which we assemble: It will never fail. It is not just human; it is human and divine. The love with which the Son has always loved the Father and always will: that love, and nothing less, is our sacrifice. The divine love will not fail. Nothing is more solid. It holds up the very pillars of the earth.

So let’s rouse one another by confessing our sins and living out of this divine love. Only God knows what all will come of our efforts. But He has given us to know that nothing we do in the name of building up this assembly—none of it will be done in vain.

Other assemblies come and go. There will come a day when the Virginia General Assembly will cease to convene. And the U.S. Congress. The U.N. General Assembly. Even the international Star Trek Aficionados Convention will one day meet no more.

But our assembly will last forever. Nothing we do to build it up will be done in vain.

Parochial vicars usually do not preach on Holy Thursday. We usually listen to the pastor preach, like everyone else does.

Two years ago, though, I had the privilege of preaching on Holy Thursday. This morning, I was trying to organize some of my files, and I turned up that homily. Here it is: