The Holy Spirit, who the Father will send in My name, will teach you everything. (John 14:26)

These are the words of our Lord Jesus to the Apostles at the Last Supper. He was explaining to them what would happen after He ascended into heaven. 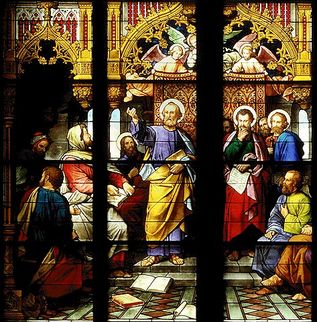 That was the beginning of the Catholic Church.

The Lord Jesus had taught the Apostles many things while He was on the earth. There would be many other things He would teach them from heaven. As He promised, He sent the Holy Spirit to guide His Church.

In the Acts of Apostles, St. Luke recounts the first Church Council. The situation was this: The Apostles had gone out from Jerusalem to preach the Gospel. In the surrounding countries, both Jews and non-Jews came to believe. This left the Apostles with an honest question.

END_OF_DOCUMENT_TOKEN_TO_BE_REPLACED

A lot of people saw the Lord Jesus after He rose from the dead. St. Paul lists some of them:

All of the people who saw Christ after His resurrection were certainly overjoyed. All of them were filled with zeal for the kingdom of God and hope for eternal life.

We owe these eyewitnesses everything: Our faith is based on their testimony. Our goal is to follow in their footsteps.

Here is a question:

Of all the people who saw the Lord after He rose from the dead—who was it who deserved to be the first to see Him?

Of course, anyone who saw Him was not about to complain and say, ‘Gosh, this is great to see Christ risen from the dead, but why did I have to wait until now? Why did so-and-so get to see Him before me?’

No—no one complained about the order in which He appeared to people. It didn’t matter if you were the first or fifth or five-hundredth to see Him. All that mattered was being an eyewitness of the Lord’s triumph over sin and death.

END_OF_DOCUMENT_TOKEN_TO_BE_REPLACED

It is nice to be back in familiar pastures. Your servant has returned for a holiday at the beach, and we find ourselves at the wifi hotspot where this little weblog began.

In its first year of publication, Preacher and Big Daddy has seen its ups and downs. When it comes to readership, we have taken this motto from Seneca: “A few is enough for me. So is one. So is none.”

That said, we enjoy a few hundred visitors each day. It may be true, dear reader, that you would never join a club that would accept you as a member. Nonetheless, the P&BD society is a happy, medium-sized group.

…This Shakespearian Bests is retired: