Forgive me; I have been a little out of it. I guess all the flags in Washington are not flying at half-staff in honor of my aunt.

May God, in His mercy, gather his lambs. May He comfort us all.

Click HERE for the notes for tomorrow afternoon’s Advent talk.

Rejoice in the Lord, brothers and sisters! The peace of God which surpasses all understanding will guard our hearts and minds. This is our well-founded faith.

At one point in time, all of us were baptized. As of that moment, the Holy Spirit of Christ began to guard our hearts and minds, having sealed them with His mark for the day of glory. 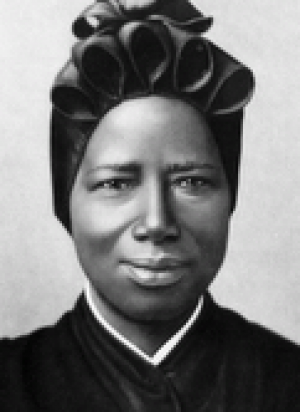 For each of us, our baptism into Christ, into the Trinity—it happened in a particular place, on a given moment in time. Probably in a baptistery of some kind, in a church; probably on a happy and proud day for mom and dad. For me, it was October 18, 1970, in a church on New York Avenue, N.W., in downtown Washington, D.C.

I was a babe in arms then, much shorter than I am now…

Like: all the Apostles, St. Ambrose, St. Augustine, St. Josephine Bakhita, the emperor Constantine, Thomas Merton, and Bob Dylan, to name a few. They were all baptized as adults.

Anyway, as we read, St. John the Baptist prophesied that we would be baptized into Christ. He prophesied that the Holy Spirit would come upon us and take charge of guiding us to eternal bliss.

END_OF_DOCUMENT_TOKEN_TO_BE_REPLACED

The “cloak of misery.”The Word of God orders us to take it off.

What exactly is this dark and dingy cloak? And which exactly are the crooked and rough ways which we must straighten and smooth?

Maybe the prophet means the robe of a shallow, scattershot, and discombobulated life. A life without a fundamental commitment to give it meaning.

The Fathers of the Second Vatican Council considered many of the problems of our age. They identified one of them like this:

Many of our contemporaries never get to the point of raising questions about God, since they seem to experience no religious stirrings, nor do they see why they should trouble themselves about religion. (Gaudium et Spes 19)

Never get to the point of raising questions about God? Can we live a consistent life, a steady life, a unified life, without raising questions about God? Can we really even know ourselves at all without religion? Without genuine, faithful religious practice? Regular practice based on solid foundations and not just emotions and sentiments, or my own self-interested preferences?

END_OF_DOCUMENT_TOKEN_TO_BE_REPLACED

Your unworthy servant customarily delivers little talks during the seasons of Advent and Lent.

The talks for Advent this year will attempt to communicate the teachings of Gaudium et Spes, Vatican II’s Constitution on the Church in the Modern World.

All are welcome at St. Joseph church in Martinsville, Va., at 4:00 p.m. on the next four Sundays. We will also celebrate Vespers together, with Exposition of the Blessed Sacrament and Benediction.

In the event that you might be interested in perusing the notes for the talks, I thought I would publish them here, one at a time. Click away for Gaudium et Spes Notes 1.

The Apostles received the commission to preach to everyone about Jesus and to baptize all who believed.

Sounds simple, and it is.

But, of course, the Apostles received their commission as Jews; their Lord, the Son of God, had lived the life of a faithful Jew; the Jewish people had a long history of direct dealings with God; and the salvation of the human race had been worked by none other than Yahweh of the Jews—Whose people, everyone knew, had highly unusual customs, not all of which could just be lightly thrown aside, since they had been the customs of the Son of God, customs which He had infused with full meaning by celebrating them Himself.

Hence the need to focus, and re-focus, and focus again on precisely what Jesus had commissioned the Apostles to do. With what exact task did He commission the patriarchs of His New Covenant? To distribute the graces of His work–all of which graces are based on faith in Him, in Jesus.

And to have faith in Jesus Christ means believing completely in the Old Testament, as well as the New. It means understanding the Old Testament for what it is, namely the account of the preparations for the coming of the fullness of time.

And it means understanding the New Testament for exactly what it is, namely the written documents left by the Apostles during the first generation of the life of the one, holy, catholic, and apostolic Church, governed by St. Peter and his successors in office.

Salvation by faith? Yes, of course. But not faith in anything vague, not faith in anything that my own imagination has produced, or that the imagination of any other mortal has produced. Faith in the actual, true God—triune, attested-to infallibly by the Sacred Scriptures in their entirety, fully revealed in the Person of the man from Nazareth, Whose grace we receive in the Church governed by the Pope.

In the seminary, we would get each other laughing sometimes by saying the phrase “human person” in a booming Polish accent. Oomun pear-sewn.

The second half of the 20th century saw the heroic career of a certain Polish prelate: first in the drafting of Vatican II’s Pastoral Constitution of the Church in the Modern World, then in the innumerable encyclicals, letters, homilies, speeches, and books of Pope John Paul II.

This Polish saint must have used the phrase “oomun pear-sewn” half a million times. Reading it all, in vast reams, night after night, semester after semester—we needed some light moments sometimes.

The human person. The only material being capable of contemplation.

These are the words of a unique creature, a creature with a transcendent dignity. These words are the fruits of the uniquely human personal action: contemplation.

We made fun. But, upon reflection, I am left thinking that: Perhaps the pre-eminent gift of the Second Vatican Council is the re-affirmation of the perennial Christian teaching that human action only makes sense when it serves human contemplation. The ultimate reason for our existence: to take delight in God and in His works, and to praise Him.

The disposition of practical affairs is subordinate to the personal realm, and not contrariwise, as the Lord indicated when He said that the Sabbath was made for man, not man for the Sabbath. (Gaudium et Spes 26)

So taught Vatican II. So taught the Polish Pope. “The personal realm,” the unfathomable depth of the oomun pear-sewn, the reason why everything exists.

When He saw the vast crowd, His heart was moved with pity for them, for they were like sheep without a shepherd, and He began to teach them many things. (Mark 6:34)

Fifty years ago this fall, the bishops of the world met together in St. Peter’s Basilica. The first session of the Second Vatican Council. The Council Fathers began by praying, of course. Then they issued a statement to the world, to explain what they were doing. In their “Message to Humanity,” the Pope and Bishops cited a passage from the gospel. Namely, the passage we just heard–about the compassion of the Lord for the poor human sheep without a shepherd.

Now, of course none of us are “old.” But maybe some of us can remember back fifty years. Fifty years might seem like a long time. But not when you “think in centuries,” like the Church does. And spiritual gifts like the Second Vatican Council do not come along very often. Like maybe once every hundred years, on average. Twenty-one ecumenical councils so far, as the 21st century begins.

“He began to teach them many things.”

END_OF_DOCUMENT_TOKEN_TO_BE_REPLACED

Today we went to the Basilica of the Annunciation to meditate on a few things.

1. Our Lady welcomed the Archangel Gabriel here with perfect humility.
2. God became man in our Lady’s womb right here.
3. He lived most of His human life here–His hidden life, the life He has shared with every human being.