We call ourselves the Holy Roman Catholic Church, the People of God, the Body of Christ. We have some exalted titles for ourselves. Another one we might have to adopt: The St. John the Baptist Society.

St. John said these words to the tetrarch of Galilee because his putative wife Herodias had another living husband, namely Herod’s half-brother, who was the tetrarch of Judea. And marriage is for life. That’s what people who marry each other say: “Till death do us part.” 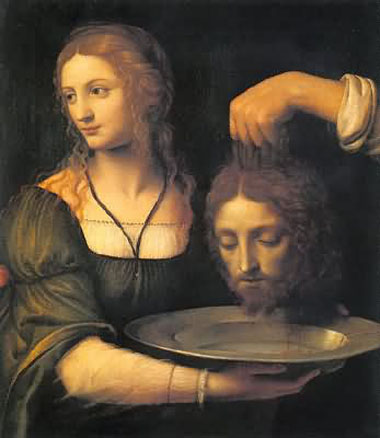 We know that St. John the Baptist preached a lot of spirited sermons. He bellowed with passion about Judgment Day and the coming of the Savior. But it would appear that his message to Herod came quietly, unobtrusively– but firmly: Your marriage is not lawful.

The Church follows John in the message and the approach. “Lawful” marriage means: faithful, fruitful, committed, irrevocable. Anything else is not lawful. We quietly deliver that message.

And the powers rage. The Church, supposedly, is mean to people by insisting on the divine laws of marriage. Better just to have mass weddings of whoever shows up at the Grammys. Now, even the UN has officially declared our teachings to be mean.

But the St. John the Baptist Society will persevere. No matter what it costs, even if it costs us our lives.

It is not lawful to try to tamper with the handiwork of God.