The Jew of Nazareth is a paradoxical character. No figure in history or fiction contains as many multitudes as the New Testament’s Jesus. He’s a celibate ascetic who enjoys dining with publicans and changing water into wine at weddings. He’s an apocalyptic prophet one moment, a wise ethicist the next. He’s a fierce critic of Jewish religious law who insists that he’s actually fulfilling rather than subverting it. He preaches a reversal of every social hierarchy while deliberating avoiding explicitly political claims. He promises to set parents against children and then disallows divorce; he consorts with prostitutes while denouncing even lustful thoughts. He makes wild claims about his own relationship to God, and perhaps his own divinity, without displaying any of the usual signs of megalomania or madness. He can be egalitarian and hierarchical, gentle and impatient, extraordinarily charitable and extraordinarily judgmental. He sets impossible standards and then forgives the worst of sinners. He blesses the peacemakers and then promises that he’s brought not peace but the sword. He’s superhuman one moment; the next he’s weeping.

Bad Religion‘s chapter about the “quest(s) for the historical Jesus” made me laugh with delight and cry with sweet consolation.

If you don’t have time to read the (impressively erudite) book right now, the moral of this chapter is: Jesus, the Church, and the canonical gospels (and the whole New Testament) go together like love and marriage and a horse and carriage. If you want to get in touch with the “Jesus of history,” you do well to begin by reciting the Nicene Creed. 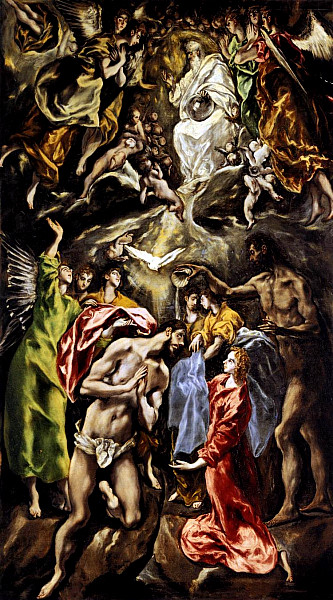 Today the Church commemorates the occasion on which John baptized Christ. This commemoration inevitably gives rise to the question: Why did Jesus go to John to be baptized? After all, Christ did not need to repent of sin and be cleansed.

Confronted with this eminently reasonable question, I have frequently proposed the following: The waters of John’s baptism did not cleanse Christ. To the contrary, by going into the Jordan, Christ conferred on water the capacity to give saving grace through the sacrament of Holy Baptism.

Here, however, is the problem. The response I give can be greeted in three ways.

2. Accepted as a viable statement of Catholic piety, but dismissed as far as being an historically defensible assertion.

3. Rejected as a kind of theological fantasy that does not correspond with the facts of history.

If your reaction is #1, feel free to give up on this little essay, which will doubtless prove to be tedious.

END_OF_DOCUMENT_TOKEN_TO_BE_REPLACED

Today the Twelfth Synod of Bishops began at the Vatican. What is a Synod of Bishops? Is it like another Vatican II? Vatican II was an ecumenical council, a meeting of all the world’s bishops together with the Pope. A Synod is a meeting of a smaller, representative group of bishops from around the world. They meet with the Pope to discuss a particular topic. The Synod helps the Pope to teach exactly what the world needs to learn. They are part of the reason why the Pope is probably the most well-informed person on earth.

Synods of Bishops do not tend to produce fireworks. They are church-wonk study sessions. This is the second Synod over which Pope Benedict has presided. The last one, on the Holy Eucharist, was actually called by Pope John Paul II, but then he died before the Synod met. A Synod usually submits some thoughts to the Pope, and then he publishes an Apostolic Exhortation to summarize the Synod’s discussions. Pope Benedict’s Apostolic Exhortation on the Holy Eucharist was beautiful, profound–but not exactly earth-shattering.

This Synod, however, could wind up being a little more exciting. Pope Benedict himself chose the topic for this one: The Word of God. Twenty years ago, Cardinal Ratzinger gave a lecture in New York City on how to interpret the Bible. That lecture was earth-shattering.

The lecture is not the easiest thing to understand, and it is rather long. What it comes down to is more or less this:

There is no such thing as a “simple, literal” way to understand the Bible. The Bible must be interpreted according to reasonable principles. The Church relies on scholars who help us to understand the Word of God by undertaking solid, well-researched studies. The better a scholar understands the historical situation in which a book of the Bible was written, the more insight his study will provide. Many of the books of Scripture narrate history, and all of them are the product of history, so Scripture study is first of all the study of history.

Starting about 300 years ago, historians began to imagine themselves as scientists, capable of being rigorous and objective like chemists and physicists. The attempt to understand the Bible “scientifically,” however, has produced nothing but confusion. Scholars thought that modern developments would unlock the Bible’s “secrets.” Instead, they have produced a spiderweb of theories attempting to tell us what the Bible “really” says. They all disagree with each other. Modern historical-critical scholarship is enough to make any honest man a fundamentalist.

In his lecture, the Pope (then Cardinal) exposed some of the fundamental problems underlying the bad situation. Modern Bible scholars assume that miracles do not happen. This is an unreasonable presupposition. God is God; He can work miracles if He wants to. The Pope pointed out that modern scholars tend to assume that philosophy is more important than the events recorded in Scripture. This, too, is unreasonable; for the believer, philosophies come and go, but the deeds of God are what matter more than anything. The Pope’s lecture pointed out that the contemporary controversies about how to understand the Bible are not really about history at all. They are about the underlying philosophies of the scholars.

At the end of the lecture, Cardinal Ratzinger made his most important point. No one can claim to be objective and disinterested about the Sacred Scriptures. Or rather, to claim to be objective and disinterested does not qualify you as an interpreter of the Bible. To interpret historical writing, the most important thing is sympathy with the author. We are more likely to understand what is written if we can relate to the writer. The human authors of the Sacred Scriptures believed in God, and they believed that God acted in history in order to save the human race. Therefore, we are most likely to be able to understand the books of Scripture if we believe in God, the God Whose deeds are recounted in these books.