How exactly did David sin by ordering a census? It would seem that the simple act of counting the people does not, in and of itself, constitute a sin. God ordered Moses to count the people. Hence we have a book called…Numbers.

So David did not sin simply by ordering the count. The sin had to do with David’s intentions. Did he want the sword-bearing men counted because he had a mind to expand his realm even further, in order to bring greater glory upon himself?

David’s general Joab initially objected to the taking of the census. At this point in time, the king had reached old age. Joab certainly thought, with good reason, that there could be no sense in launching another military campaign anytime soon. 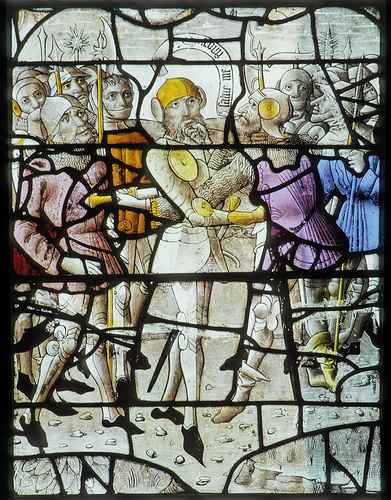 We admire King David as a beautiful and noble man. We also know him to have been weak and sinful, too. After all, who among us can claim immunity from pride and vanity?

So perhaps David ordered the census for vanity’s sake, and thus it was a sin.

It is a happy co-incidence, then, that we read about this—speaking of counting—on the 39th day after Christmas, which is the day before the baby Jesus was presented to the Father in the Temple.

If anyone has good, solid reasons to be vain and proud, that would be God. God would have every right to enter His Temple in splendor and state, with smoke and thunder.

But He did not do so. He did not even travel under His own power when He entered His Temple. He had not yet learned to walk.

Mid-winter is the time of year for blessing church candles, and for using blessed candles to bless people’s throats. With the April temperatures we have had, it hardly seems necessary to give St. Blase blessings. But let’s not jinx ourselves. The groundhog could still see his shadow.

But the point is this: The beautiful candle of divine humility has been lit. The Blessed Mother and St. Joseph carried Him in. Simeon did not cower in terror. Rather, the old priest saw a smiling divine baby, and he sang his canticle of peace. The promise of the prophets has been fulfilled with a quiet word of love; the Messiah has come, and He is, above all, gentle.