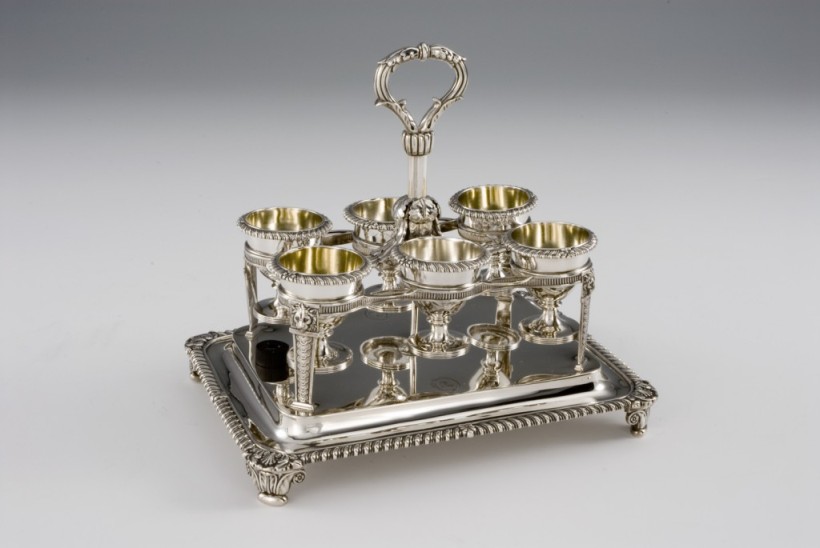 Granted, the desire to spend an hour in a museum, gazing at 18th- and 19th-century English silver table settings, qualifies as a highly unusual mood.  But if such a mood never overcomes you, when will you ever encounter an egg stand like this one?

I experienced just such a mood yesterday afternoon, during a brief sojourn in Richmond.  The Gans Collection at the Virginia Museum of Fine Arts also includes this exquisite chalice from the 15th century:

…Speaking of lifting up the cup of salvation and calling on the name of the Lord:  fifteen years ago yesterday, St. John Paul II, Pope Francis, a lot of other people, and I all took part in Holy Mass at St. Peter’s Square together.

I think it’s safe to say that, on that day, only the Lord knew how new-Cardinal Bergoglio would one day become Pope Francis.

…A tempest has erupted in the teapot of one of my alma maters.  Williams College rescinded a speaking invitation, and the campus free-speech fighters of the world find themselves up in arms.

The speaker has published his canceled talk on-line.  The man may very well be a hate-filled bigot.  But the talk he has published does not give evidence of that, and it raises questions that I myself have often wondered about.

What does “being American” mean?  Derbyshire eliminates the possibility that American identity arises solely from agreement about particular ideas.  He shows that even the Founders did not envision it that way.  They believed in common English ancestry among American “patriots” (even though that belief was, in fact, inaccurate.)

In my own personal reflections on the question, I have come to the conclusion that the only genuinely distinguishing factor we can use for “American” is the land itself.  If we live in the United States of America, if we exercise our social nature as human beings on this particular expanse of earth, then we are Americans.  (And, of course, we owe each other–everyone with whom we share our beloved land–respect, good will, and mutual support.)

If you have been reading this little weblog a long time, you know that one of my “issues” is:  I don’t find much use in ideas like Church/state separation and the First-Amendment religion clause.

I think the early-21st-century “crisis of identity” is far too profound for such ideas.  The dream of “American freedom of religion,” when removed from the far-deeper foundation of belonging to the Christian Church, does not have any content.

I think the dream of American freedom and individual autonomy has become a dangerous chimera, in fact.  Imagining that I can serve as an ultimate authority on moral and religious matters only cuts me off from the basic elements of human identity.  Because I belong–to a family, to the family of God–I can know how to live a decent life.  Without that belonging, I’m lost.  And that belonging comes at the price of my autonomy–there is no way to get around that.

I don’t know if Donald Trump is a Christian or not.  I don’t consider it any of my business.  (I continue to think that his immigration-policy proposals fall well beneath the loving kindness that Christian solidarity with our neighbors demands.)

Also, I certainly do not consider it any of my business to judge whether or not Pope Francis should accuse Mr. Trump of neglecting Christianity.

But this much I will say:  The idea that no one has the right to declare whether or not I am a Christian, other than me:  that idea sounds like the dream of “American religious freedom.”  Thank God it isn’t true.

No prelate should lightly proclaim that any individual abides outside the flock of Christ.  But: a world in which no shepherd has the authority to make such a declaration is a world of hopeless isolation.  It is a world in which the one “identity” we all need–redeemed children of God–has been lost.  Because we become redeemed children of God precisely by becoming members of His Church.  The only known means of divine adoption is:  Holy Baptism, according to the rite of the Church.

Which means that the late-20th-century American ideal of individual religious self-determination is simply impossible.