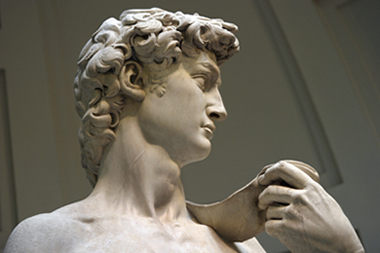 As we read in our first reading at Holy Mass today, King David intended to build “a house” for the Lord. A temple to hold the Ark of the Covenant. We can imagine that David thought he would do a magnificent act of religion this way.

The prophet Nathan came to correct David, to remind the king that God needs no favors from us. Rather, the prophet declared to David: The Lord brought you this far, and He will continue to build up your house. He will give you a royal son. You will found a royal dynasty.

Indeed, King David did, by God’s grace, found an everlasting dynasty. The Messiah, the God-man, the King of the universe, sprang from David’s loins. The Christ came into the world as a descendant of David. All this, by God’s power.

For us to imagine that we can do God any favors: that’s a kind of idolatry. We cannot domesticate Almighty God. His power and sway are absolute; all goodness proceeds from His unfathomable blessedness.

We cannot benefit Him. He benefits us. He needs nothing from us. We need everything from Him. We even need to beg Him to give us faith, to give us religion. As we pray in one of the Eucharistic prefaces at Mass: Our desire to thank You is itself Your gift, O Lord.

So Nathan had to correct David, because the king had a delusion about acting with god-like generosity towards God. But the prophet did not get severe with the well-meaning but misguided king. To the contrary: through the prophet, the Lord offered David His loving friendship.

That’s what happens. When we humble ourselves before God, recognizing that all good comes from Him, and all we really have to our own credit are our sins; when we abase ourselves and live in that truth, then He lifts us up and enters into intimate communion with us. We are but dust and ashes, and yet He makes us his partners, His ambassadors, His priests. 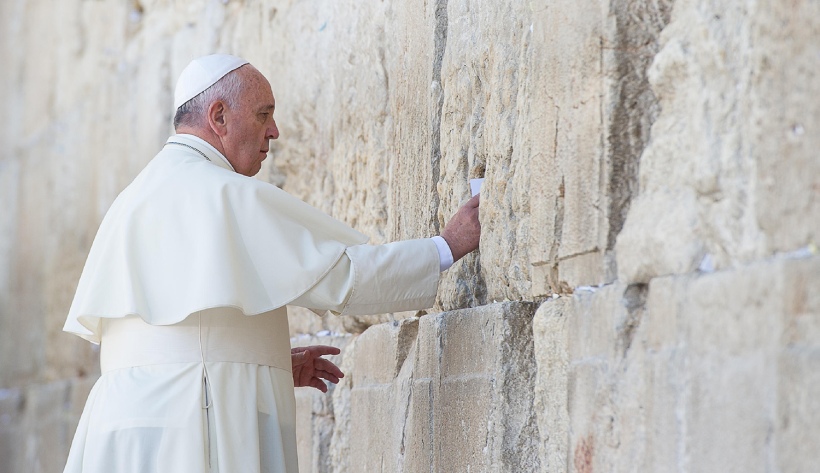 In the first reading at Holy Mass today, we read about how King David captured the city of Jerusalem from the Jebusites, a non-Hebrew Canaanite people.

We tend to think of Jerusalem as the most thoroughly “Biblical” of cities, as God’s city. But archaeologists tell us that the city had a 3,000 year pagan history before King David captured it.

According to ancient tradition, the founder of the Hebrew people, Abraham, came from what is now Iraq. He prepared to sacrifice his son Isaac on the spot that later became the threshing floor of Araunah the Jebusite.

So, after King David captured the city from the Jebusites, David’s son Solomon built the Temple on that spot. The site that Abraham had consecrated centuries earlier by his faithful obedience to God.

King David captured Jerusalem by military conquest. Today we recall another military capture. Pope Francis said we should commemorate the 75th anniversary of the Soviet army capturing the Nazi concentration camp at Auschwitz in Poland. The Red Army liberated the surviving Jewish prisoners.

As a young GI, my grandfather participated in the liberation of a different concentration camp. He was utterly horrified by the sight of the emaciated prisoners, whom the Nazis had all but starved to death. In fact, the sight impacted my grandfather so heavily that he never spoke of it. We never knew that he had participated in the liberation of a death camp. But after he died, my mother and aunt found black-and-white photos he had taken with his little camera, after his division captured the camp.

May God be merciful to us for the horrible crimes we human beings have managed to commit against each other. May He pour out His grace to help us find peace among ourselves.

I will give you rest from all your enemies. (II Samuel 7:11)

Almighty God said this to King David. ‘I will give you rest from all your enemies.’

We can hardly imagine, I think, what a relief it was for David to hear this. After all, Scripture sings of the young king that he “played with lions as with young goats and with bears as with lambs of the flock. Did he not kill a giant?”

So David was relieved to hear that rest from his enemies was coming. And the Lord’s statement gives us hope, too. Especially when we consider:

“As soon as they hear about the mystery of the Kingdom of God, Satan comes at once.”

And if we survive that, then “tribulation and persecution comes.”

Not to mention the fact that we have to deal with “worldly anxiety, the lure of riches, and the craving for other things,” things other than heaven.

Our enemies are lined-up, in other words, like they lined up before King David, ready to take a crack at us at a moment’s notice. Staying focused on the invisible things of God can become enormously hard. It takes a long time for the seed to grow into full flower, and a lot of weather comes in the meantime—polar vortexes, summer droughts, ice storms, derechos, etc.

But we can count on God’s help. We read also of David, in the same place where it recounts how he played with lions and bears, that “he appealed to the Lord, the Most High, and God gave him strength.”

So let’s appeal, too. Help us, O Lord, to persevere in faith! May we have the better of the spiritual enemies who tempt and haunt us. And, when it shall please You, we look forward to the rest You will give us from their attacks.

How exactly did David sin by ordering a census? It would seem that the simple act of counting the people does not, in and of itself, constitute a sin. God ordered Moses to count the people. Hence we have a book called…Numbers.

So David did not sin simply by ordering the count. The sin had to do with David’s intentions. Did he want the sword-bearing men counted because he had a mind to expand his realm even further, in order to bring greater glory upon himself?

David’s general Joab initially objected to the taking of the census. At this point in time, the king had reached old age. Joab certainly thought, with good reason, that there could be no sense in launching another military campaign anytime soon.

We admire King David as a beautiful and noble man. We also know him to have been weak and sinful, too. After all, who among us can claim immunity from pride and vanity?

So perhaps David ordered the census for vanity’s sake, and thus it was a sin.

It is a happy co-incidence, then, that we read about this—speaking of counting—on the 39th day after Christmas, which is the day before the baby Jesus was presented to the Father in the Temple.

If anyone has good, solid reasons to be vain and proud, that would be God. God would have every right to enter His Temple in splendor and state, with smoke and thunder.

But He did not do so. He did not even travel under His own power when He entered His Temple. He had not yet learned to walk.

Mid-winter is the time of year for blessing church candles, and for using blessed candles to bless people’s throats. With the April temperatures we have had, it hardly seems necessary to give St. Blase blessings. But let’s not jinx ourselves. The groundhog could still see his shadow.

But the point is this: The beautiful candle of divine humility has been lit. The Blessed Mother and St. Joseph carried Him in. Simeon did not cower in terror. Rather, the old priest saw a smiling divine baby, and he sang his canticle of peace. The promise of the prophets has been fulfilled with a quiet word of love; the Messiah has come, and He is, above all, gentle.

Can any of us football fans ever forget the thrill of February 3, 2008?  Goliath fell, hit by a rock from a little sling.

We Redskins fans should not, therefore, expect two miracles in a row in New York Giants’ games.  Let us resolve to be happy if the season opener Thursday evening is a solid effort.

Dan Snyder beat Senator McCain to the punch by eight months:  The Redskins owner made a bold move that looks toward a beautiful long-term future before the Republican nominee ever thought of any governor of Alaska.  Our beloved owner deserves credit for this, loathe as anyone is to give him credit for anything. 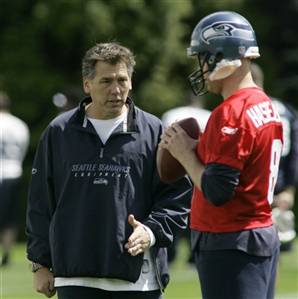 Let us hope that Coach Zorn fulfills the promise.  Even though I have no idea what I am talking about (like many football fans), allow me to opine on the art of coaching:  In the end, being a successful coach is a matter of bigness and nobility of character.  Everybody has the “science” of football; spiritual leadership is what makes the difference.  (Talented players, of course, do not hurt–but there are plenty of talented Redskins.)  If Jim Zorn is half as big a man as Joe Gibbs is, if he can be half the spiritual leader Joe Gibbs was, then the future is very bright.  If not…well, it is not a pretty scenario.

If you are reading, coach, here is some advice from someone who certainly has no right to offer any.  Meditate on this moment from last season:  The Patriots had just shellacked the Redskins.  It was an embarrassment of historic proportions.  As everyone left the field, reporters hounded the head coach for a comment:  “Who’s to blame?”  At one of the lowest moments of his life, at a moment when most men would grasp at every straw in the cup to find someone or something else to complain about, Joe Gibbs calmly said, “There is plenty of blame to go around, but it begins with me.”
Loading Comments...