Do you reject Satan, and all his works, and all his empty promises? Do you believe in Almighty God, in His Son Jesus Christ Who died and rose from the dead, in His Holy Spirit, and in His Church? [Spanish]

Baptismal promises. They involve a decision, a choice. The fundamental choice of life: to reject the seduction of short-term satisfaction through sin and to embrace the call of God. To offer our lives in sacrifice to the Father, as Jesus did on the cross. To pass over to eternal life, by living for God.

We choose in response to God’s choice. As St. Paul puts it in our second reading at Holy Mass on Sunday, we are God’s “chosen ones.” He chose us for eternal life even before the foundation of the world. He inscribed our names in His Son’s Sacred Heart, numbering us among His adopted children.

Hopefully everyone knows the main reason we have the season of Lent: For the final preparation of adults preparing for baptism. During these six weeks, they dedicate themselves to an especially intense spiritual life, as the day when they will become Christians approaches. Let’s make sure we pray hard for them.

Many of us became Christians while we were still infants, carried to the baptismal font by our parents. They, with our godparents, made the baptismal promises that day. They chose on our behalf to reject sin and live for God.

Holy Mother Church gives us already-baptized people the forty days of Lent to renew the baptismal choice and make it more and more our own. After all, it takes a lifetime for anyone truly to choose God. The day of baptism comes and goes quickly, but we only really finish making our baptismal promises at the moment of death. In the meantime, we work on deepening our rejection of Satan and our faith in God.

Perhaps this is one reason why the Church always reads the account of the Transfiguration near the beginning of Lent. The main reason, of course, is: Christ let Peter, James, and John see His divine glory in order to prepare them for His Passion and death. Lent prepares us for the same thing.

But there’s more. Lord Jesus allowed Peter, James, and John, to see what we normally cannot see here on earth. In heaven, the saints see what Peter, James, and John saw on Mount Tabor. But as we Christians make our pilgrim way through life, we must have faith that Jesus of Nazareth is God; we believe that He is.

For a moment, though, these three chosen Apostles saw. They saw the divinity of the Eternal Word made man. That was an extraordinary gift of insight, to be sure. But we, too, share in Peter, James, and John’s special vision of Christ in our own way. Christian faith gives us supernatural insight into the workings of divine Providence. We can learn to recognize temptations when they come our way, and to recognize the moments when God embraces us with His true love. Even though these two realities often wear disguises.

Anyone familiar with William Shakespeare’s play Macbeth? It involves a perfect example of what I mean. Early in the play, Macbeth thinks that Fate is “blessing” him with the opportunity to sit on the throne of Scotland. He thinks that the doors of ambition open before him because some higher power is working for his benefit. But Macbeth learns, in the the end, that an evil power has actually seduced him. Macbeth becomes king, but to his utter ruin. It costs him his happiness, his life, his soul.

May keeping Lent help us to put that in reverse. May we learn to see a temptation when it comes our way, no matter how shiny and attractive it may be. And may we learn to embrace with joy whatever little share in His Cross the good Lord gives us. Because to share in Christ’s cross is the greatest blessing we can receive in this pilgrim life.

Few things satisfy a person like Macbeth, performed without gimmicks, without extensive script-cuts.  Without nonsense.  Just the subtle workings of ambition, of manipulation, and of craven hopelessness.  Then the revenge of honesty and the restoration of order.  With good witch scenes in the middle.

Tomorrow, we get to see As You Like It.

Thank you, dear people of St. Joseph’s in Martinsville, who gave us this trip!

Can’t come to Canada without reading Francis Parkman.  In Montcalm and Wolfe, Parkman formulates a fascinating thesis:  What we call the French and Indian War–the part of the European Seven Years War fought in the American colonies–marks the decisive turning point in modern history.  The hegemony of medieval authoritarianism–incarnated in the French colonial system–got crushed, unleashing the forces of the English Enlightenment, which proceeded to rule the world.

Parkman wrote before our 20th-century sensibilities about the native tribes in America.  He knew how much closer the French got to the Indians than the English ever did.  Frenchmen married Indian women.  And of course the French hoped to share their religion with the Indians.  But Parkman did not regard the French interaction with the Indians as inherently virtuous, as we sons and daughters of latter times might regard it.  (The North-American Jesuit martyrs are among my most-beloved heroes, so I certainly regard the French interaction with the natives as amazingly virtuous!)

Anyway, Parkman’s thesis begs the question:  Where does the war between the Roman Church and the Enlightenment stand now?  In the 1880’s, Parkman saw a decisive victory achieved in 1763.  But aren’t we “Romish zealots” still standing and fighting?  We Romish zealots may yet decide the course of the 21st century. 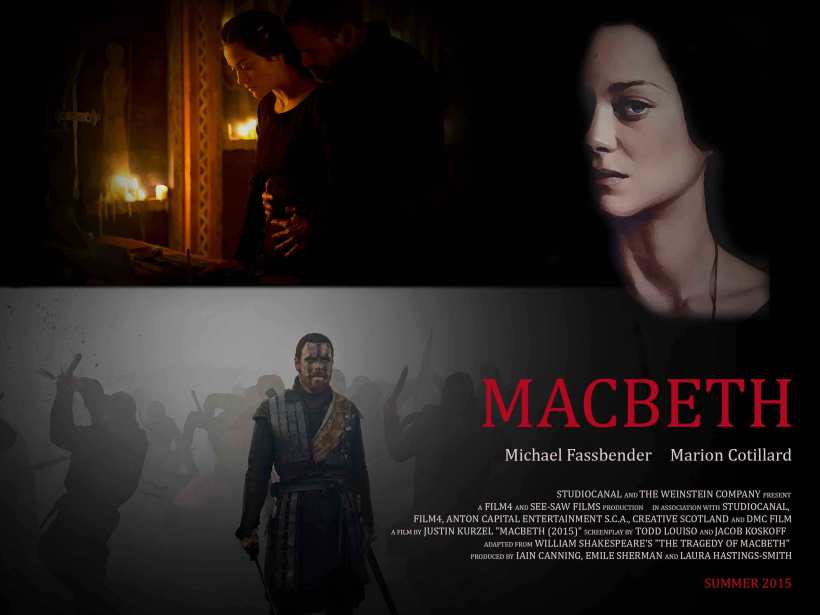 Back in 1990, Mel Gibson made a Hamlet movie. Watching it gave you this sense: No one involved in making this movie really cares about what the words mean.

Watching Michael Fassbender’s Macbeth movie makes you wonder: Does anyone care what words mean anymore? For most of the movie, actually, the actors don’t even bother talking. (So maybe they should have made a movie version of a play by a less-talented playwright?)

Shakespeare’s Macbeth has certain crucial narrative elements, which make it interesting. One of them is that Macbeth murders Duncan secretly. Lady Macbeth said that “had he not resembled my father as he slept, I had done’t.” The new thane of Cawdor, in a haze of ambition stirred up by his wife’s malice, secretly kills his fatherly benefactor. Off stage.

All the dramatic tension in the first part of the play turns on the secrecy of this murder. The audience simultaneously occupies two worlds: The dark, secret world in which the heath witches have promised Macbeth the kingdom, where Lady Macbeth swears that

The raven himself is hoarse
That croaks the fatal entrance of Duncan
Under my battlements. (I.v)

The audience also occupies the outer world of the Scottish court, where Duncan has named his son Malcolm his heir. That Banquo, like the audience, has access to both these worlds–that he knows the secret of the witches–makes him dangerous to Macbeth.

In Fassbender’s nightmare of a movie, there are no secrets. Nothing hidden that awaits revelation. Malcolm suddenly stands at the bedside of his murdered father, catching Macbeth literally red-handed.

Where could the drama of the play go from there? Short answer: Nowhere, fast.

All the dramatic tension of the second part of the play turns on the fact that Macbeth has slipped deeper into malice even than his wife. He keeps secrets from her. Eventually the Lady’s conscience takes vengeance on her, while her husband just keeps piling up secret homicides.

But, like I said, Fassbender’s Macbeth has no secrets. So, in the movie, Macbeth publicly burns the wife and children of Fife at the stake. By this point, though, we have long since given up on any of this movie making any sense.

Now, Shakespeare has an interlude at the end of Act IV of his script, which even self-respecting Shakespeare troupes often cut. Macduff and Malcolm, exiled in England, debate the latter’s worthiness to return and seek the Scottish throne.

Malcolm, trying to gauge Macduff’s motives in coming to England, paints himself as a worse villain even than Macbeth. Macduff stands ready to excuse royal lust and avarice, within limits. Then Malcolm pushes Macduff to the breaking point: I have no piety or love of justice, either! Macduff explodes with anger at the idea that no worthy king for Scotland can be found.

Malcolm then ends the charade and explains how he only intended to test Macduff. Malcom’s soul, in fact, lives free of lust and avarice. He has his father Duncan’s virtues.

In other words: Good and evil matter. Scotland may have a murderous, usurping tyrant for the moment. But chaos does not rule. Outside the bewitched interior world of Macbeth and his wife, good order and honesty continue.

When Burnham Wood comes to Dunsinane, the green leaves of the tree branches used as cover by the approaching army serve as an insignia of goodness and justice. Macbeth’s is a world of burning sulphur. But outside his twisted, compromised mind, the sun shines.

In Fassbender’s movie, Burnham Wood comes to Dunsinane as burning ash. There is no good world in this movie. Which makes the breathless, relentless evil that fills it oppressively boring.

Macbeth, the play, offers timeless human insight. Macbeth, the movie, pummels the audience to no purpose. Even if I myself fell into the depths of malice into which Macbeth falls, I would not wish the watching of Fassbender’s Macbeth on my worst enemy. 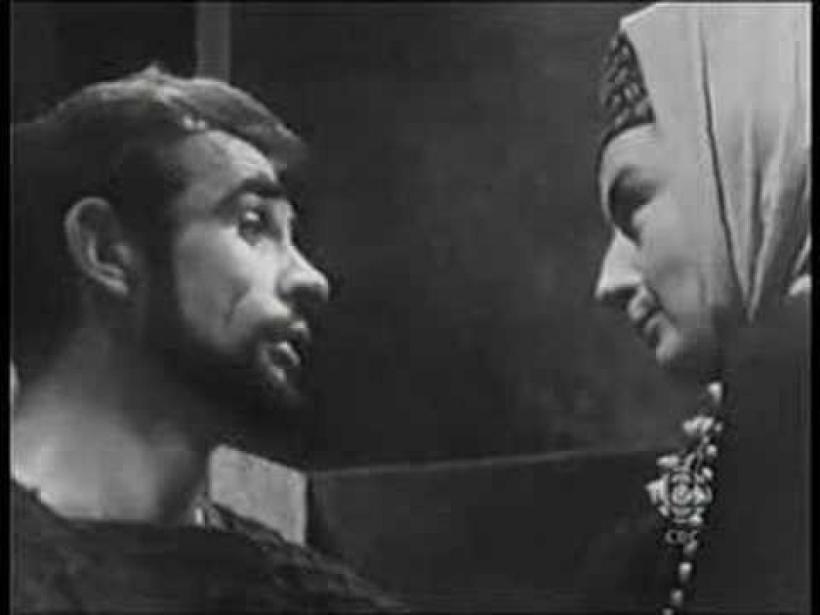 I never knew a performance of Shakespeare’s Macbeth could so thoroughly enrapture a person, until the American Shakespeare Center (in Staunton, Va.) players did it to me.

They managed to produce the Platonic forms of all the characters. Macbeth: Martial, fraternal, and desperately in love with the only true confidante a man in such desperate, violent times can have, his wife. Banquo: The nobler of the two soldier-friends, but just barely. Duncan: magnanimous, not simpering. Macduff: tortured, but manly. Lady Macbeth: ravishing, graceful, and just imaginative enough to come untethered from reality.

To be honest, until I saw this ASC production, I did not adequately understand how seamless a masterpiece the play really is. Even the comic relief–the drunken porter muttering jokes to himself about souls arriving in the bad place, as he makes his way to the castle gate–serves the dramatic effect.

END_OF_DOCUMENT_TOKEN_TO_BE_REPLACED

July 10, 2009 frmarkdwhiteLeave a comment
My homily this Sunday will be about hoping for heaven, no matter what.

The perfect counter-example is Shakespeare’s Macbeth.

I wish I could find a way to put Macbeth in my homily, but I have not the skill…

Macbeth kills Duncan and becomes king, as the witches predicted.

Nonetheless, Macbeth is overcome with fear that his friend Banquo’s heirs will be kings in the future.

To be thus is nothing;
But to be safely thus…

Upon my head they placed a fruitless crown,
And put a barren sceptre in my gripe,
Thence to be wrench’d with an unlineal hand,
No son of mine succeeding. If ‘t be so,
For Banquo’s issue have I filed my mind;
For them the gracious Duncan have I murder’d;
Put rancours in the vessel of my peace
Only for them; and mine eternal jewel
Given to the common enemy of man,
To make them kings, the seed of Banquo kings!

Macbeth concludes that he has vainly ‘put rancours in the vessel of my peace’ and given his ‘eternal jewel’ to the ‘common enemy of man.’

In other words: “Since I already sold my soul to the devil, I might as well kill Banquo, too.”

Giving up on heaven–what could be more horrible?