The good Lord wills our integrity as human beings, our physical/spiritual health, our interior unity—however you want to put it.

The angels and demons perceive the divine power of Christ by some means of perception that we don’t have. For us, it’s a matter of… Faith.

Interior unity, genuine psychological and spiritual integrity, human virtue; a reasonable, honorable, and steady life–it all starts with faith in the Incarnation, in the divine love of the triune God.

We don’t wear red vestments today in honor of the Kansas City Chiefs. Much as they deserve congratulations. The red represents the blood of the martyr St. Blase.

Christ died in utter physical degradation, but with perfect interior virtue, total loving communion with the eternal Father. The martyrs have died likewise: Physically crushed, but interiorly as healthy as a human being can be. That is, united with God by faith in the Christ.

Jairus the synagogue official loved his little daughter. So did the Lord Jesus. St. Mark narrates well in his gospel how much fuss and bother the Lord had to endure, just to get to the little girl’s bedside. But we know how much Christ loved little ones.

St. John Bosco died 129 years ago today. He loved little ones, too. In our Collect to begin Holy Mass today, we call him “father and teacher of the young.”

Pope Francis wrote something that I find very captivating in his letter to us about love and family life. In explaining the fourth commandment, the pope wrote:

Even if one becomes an adult, or an elderly person, even if one becomes a parent, if one occupies a position of responsibility, underneath all of this is still the identity of a child. We are all sons and daughters. And this always brings us back to the fact that we did not give ourselves life but that we received it. The great gift of life is the first gift that we received. (Amoris Laetitia 188)

We forget sometimes that God has given us our lives, as a loving Father lavishing His goodness upon His children. So Lord Jesus worked a miracle to remind us.

We are children. No matter how old or “wise” or important or knowledgeable or “professional” we become. We are our parents’ children, and we are God’s children. We did not give our selves to ourselves. God gave us us; God gave me me, through my parents.

You don’t have to be a full-time soccer dad to know that, when your twelve-year-old daughter wakes up after having been widely reported dead, she’ll need something to eat.

Jairus the synagogue official loved his daughter. He also believed in Almighty God, and loved Him. The father loved God enough to think: The Lord does not will death and sadness; he does not wish me to lose my little girl.

And the synagogue official had heard of Jesus of Nazareth. Jairus believed that all the goodness of the ancient Lord of Israel, Who had liberated the people from slavery, and fed them with manna in the desert, and made their daughters graceful as columns—all that goodness dwelt in the Galilean rabbi.

Let’s try to share Jairus’ mind. Dark house. Wailing mourners. His well-meaning neighbors, thinking they were doing him a favor by coming over to caterwaul and lament how sad and miserable the world is. How there really is no hope. Meanwhile, all Jairus can think is: I just want to give my little girl a sandwich and tell her she can go outside and play after she has had adequate time to digest. Why won’t she wake up?

How the mourners must have stared when Jairus declared his intention to stride out into the dusty sunshine in search of the Nazorean rabbi.

“What has gotten into him?” they thought to themselves. “This synagogue official always seemed so reasonable—until now. Grief has overcome his wits.”

Meanwhile, Jairus is thinking to himself, “I can’t take any more of this wailing.” And Christ couldn’t stand the sound of it, either. He put the mourners out of the house. After all, he had told Jairus: “Do not be afraid. Just have faith.”

Just have faith that twelve-year-old girls will continue to eat sandwiches and play soccer. Just have faith that death will not swallow our hopes. Have faith that summertime barbecues will mean peace and co-operation in families, and not misunderstanding and misery. Just believe that the heavenly Father loves His children. His loving Hands will give us life.

Up the stairs. To the little bed…

Talitha koum. Get up, little girl. I am the Lord of Life. I create day, not darkness. I bring healing, not woe. I want twelve-year-old girls to eat sandwiches and play soccer in the afternoon, not die and leave their fathers hopeless and bereft. Just co-operate with me, and all will be well.

Last week our Holy Father gave us an encyclical letter, as you probably know. Laudato Si’. Blessed be. Blessed may You be, all-powerful, most-holy Lord! May You be especially blessed through brother sun, sister moon, and sister Mother Earth. Blessed may You be, by life bubbling up everywhere.

Not to over-generalize, but: The 20th century bequeathed to us a fearful, dark outlook on things. The 20th century gave us ideas like: Nature deals in death, a law of the jungle; only the strong survive. Left to itself, nature unravels randomly and ends in chaos. Science and technology possess the ultimate power. Only our human know-how can organize and perfect the raw material. We can be ever more comfortable, if only we build better machines. Ancient religious traditions only stand in our way. 20th-century man thought that he could build better than God.

Let’s read one paragraph of our Holy Father’s encyclical…

A spirituality which forgets God as all-powerful and Creator is not acceptable… The best way to restore men and women to their rightful place, putting an end to their claim to absolute dominion over the earth, is to speak once more of the figure of a Father who creates and who alone owns the world.

The blessed, all-holy Lord does not will death and destruction. He has a plan, and He moves things to unfold for life and goodness, for grassy fields for 12-year-olds to play soccer on. Jairus the synagogue official knew: Wisdom demands my co-operating with the God of Israel, Who walked the earth to unite Himself with us.

I want to tell you how welcome you are to the White House. I think this is the most extraordinary collection of talent, of human knowledge, that has ever been gathered together at the White House, with the possible exception of when Thomas Jefferson dined alone. –John F. Kennedy, White House dinner for Nobel laureates, 1962

Last week the second grade wowed me with their knowledge of our Lord’s miracles. In the gospel passage, we hear about Him working not one, but two miracles, including raising a young girl from the dead.

1. That He is all-powerful. That He possesses the omnipotence of Almighty God. Jesus Christ is no mere man; He is the God-man. 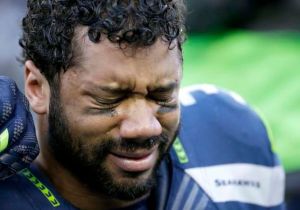 Therefore, Christ only worked one particular kind of miracle. He never made huge boulders levitate, or turned people into toads, or made lightning strike His enemies. He only worked miracles that helped people–especially weak, poor, suffering people.

Which means, having read the gospels with open minds, we can settle a question which plagued one of our great forefathers here in our beloved state of Virginia.

In 1781, Thomas Jefferson wrote: “Our numberless afflictions make it doubtful whether heaven has given life to us in mercy or in wrath.”

In other words: Is our life a blessing or a curse?

The idea that life is easy, or 100% fun, or pleasant all the time, or a cake walk—all you have to do is ask Pete Carroll or Russell Wilson, and they will tell you that life involves some afflictions.

So the $10,000 question is: Taking all the difficulties of life into account, does God have a plan for it all? A plan which, in the end, involves a good outcome? Is God mean, or is He kind?

Left to ourselves, we wouldn’t know the answer. We would be stuck like Thomas Jefferson was stuck. But Jesus has shown us the truth. Jesus endured the most cruel afflictions Himself in order to show us that: God is love.

If you recently flipped through your copy of the Catechism of the Catholic Church, you may have noticed a reproduction of an ancient painting on page 277. A painting of the woman touching Christ appears at the beginning of the section on the sacraments.

…Some of us spent last Friday evening watching a movie about St. Thomas More. The script for the movie comes from a play called “A Man for All Seasons,” by Robert Bolt.