For years, I have been telling my brother priests: The best protection against the slings and arrows of outrageous fortune is… 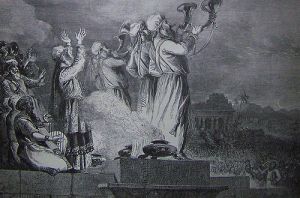 …According to the Old Covenant, a levite was to blow a trumpet from the top of the Temple wall to call the people to a holy feast.

The trumpet of the New Covenant is the sermon of St. Peter, also delivered at the Temple wall:

God has made him both Lord and Christ, this Jesus whom you crucified. –Acts 2:36

The Israelites marched into the midst of the sea on dry land, with the water like a wall on their right and their left.

We Christians are marching to the holy mountain, where it is always springtime.

To outfit us to march forward, the Lord initiates us through the sacraments. We must be washed, anointed, and fed.

Easter is a good time for us to recall and thank God for the sacraments that have made us Christians.

On October 18, 1970, I was baptized by a well-meaning non-Catholic, non-priest at New York Avenue Presbyterian church. My parents were kind enough to carry me to the font, and they saw to it that I was in church every Sunday for the next 17 ½ years. I am grateful. 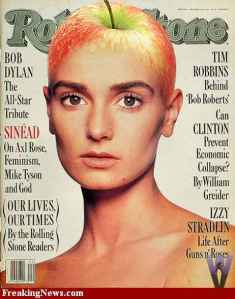 But there was still some unfinished business. On Holy Saturday night, 1993, I was confirmed and given Holy Communion for the first time by Father Ed Ingebretsen in Dahlgren Chapel at Georgetown University.

Seventeen years ago this morning, I woke up washed, anointed, and fed for the first time in my life.

It is good to be Catholic.

No one—not the Washington Post or the New York Times, not CBS News or CNN, not Geraldo Rivera or Sinead O’Connor—no one is going to tell me that it is not good to be Catholic on Easter Sunday.

We Catholics hate it when people do evil. We hate it that priests have done great evil and hurt innocent young people. We hate it that some bishops have failed to discipline their clergy like they should have.

But we know this, too: The world needs the mercy of God that comes to us through His Church.

As Norman MacLean put it in “A River Runs through It,”

When you pick up a fly rod, you will soon find it factually and theologically true that man by nature is a damn mess.

We need God. We need Christ. We need the Church. We need the sacraments. We need to be washed, anointed, and fed, so that we can march toward the goal.

…How badly do I want Butler to beat Duke?

One year ago today, we priest-pilgrims with were with Archbishop Burke at the top of Mt. Tabor.

END_OF_DOCUMENT_TOKEN_TO_BE_REPLACED

It was incredibly close. Too, too close. Altogether too close.

And the Hoyas lost to the Pirates by five points.

Seton Hall’s luck was charmed by the twentieth-anniversary commemoration of their trip to the NCAA finals.

We Hoyas fans are going to have to re-evaluate our expectations for this season. Now we really do have a losing Big East record.

On the bright side…