At Holy Mass today, we hear St. Paul give thanks that “on receiving the Word of God,” we Christians, “received it not as the word of man, but as it truly is, the Word of God.”

Almighty God has spoken His Word by sending His Son. The Scriptures bear witness to it. And I think we can safely say: Of all the sentences recorded in the Holy Bible, two of them loom uniquely large: “This is My Body, given up for you.” And “This is My Blood, poured out for you for the forgiveness of sins.” 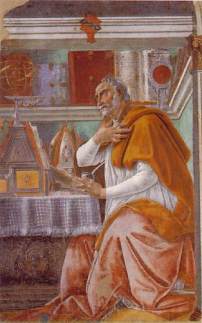 We mediocre people can’t exactly speak of St. Augustine’s “life’s work,” since he did more good work on any given day of his life than most of us manage in a whole lifetime. But one big part of St. Augustine’s work involved: clarifying the truth about the Redemption.

Mankind has both great freedom and dignity and great moral and physical weakness. The coming of Christ enables us to understand this mystery of human greatness and human weakness–at least to some extent.

The fundamentally important fact that St. Augustine clarified is: Holiness, goodness, virtue begins with God. God gives a fresh start to fallen man. Life as a Christian is, first and foremost, grace from God. He gives; He saves; He consecrates. Then, we undertake to co-operate.

Speaking of the Council of Trent… One thing they all had in common—that is, all the bishops and theologians gathered at Trent and Martin Luther and John Calvin: they all revered St. Augustine as an absolutely trustworthy teacher. They all sought to follow the teaching of St. Augustine.

Luther and Calvin had hostility towards the work of ordained Catholic priests. Not without good reason, since they saw around them an enormous amount of clerical corruption and ignorance, extending all the way up the hierarchy to the pope.

This led the Protestants to condemn the priesthood and the Mass, as precisely the kind of false, un-Christian religious work that Christ had come to free us from. They saw the Mass as a pagan-like ceremony, which interfered with our understanding of salvation as a pure gift. We don’t have to do these ceremonies as a sacrifice to God, they argued; we don’t need priests separated from the rest of the flock. Because Christ has already redeemed us, without us doing anything, making us a priestly people.

Ok. But in condemning the Holy Sacrifice of the Mass, Luther and Calvin parted ways with their teacher, St. Augustine. Augustine taught the newly baptized, who had just attended Mass for the first time: the Holy Eucharist is a sacrifice in which Christ makes Himself present, in order to be recognized by faith and then received.

Luther and Calvin were right to insist that there is only one sacrifice. But the Mass isn’t another sacrifice. It is the sacrifice of the Redemption, which frees us from sin, sanctifies us, and unites us.

We all have to take the good with the bad, however.

You would think that the Big Daddy of Big Daddies would give some relief to His unworthy servant and blogger. After all, your scribe has been launched into A.D. 2009 in a rough and tumble manner. (A sick relative and the victim of petty larceny, among other troubles.)

Everything looked so promising on Monday, December 29…