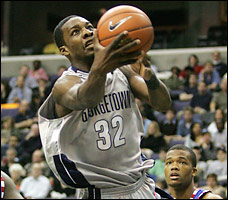 Speaking of which, it was nice to see our old homeboy Jeff Green on the court against the Wizards last night…

…Looking for an act of devotion in honor of the Solemnity of Christ the King?

Consider adding your e-signature to the Manhattan Declaration…

…After I finished high school, I got a job typing the reports of a company of local archaeologists.

The company specialized in pre-historic archaeology–that is, the study of artifacts produced by people who did not have writing.

In our area, you can discover a pre-historic artifact while you are out for a walk. There are still Algonquian arrowheads and potsherds lying on the surface of the earth.

Contrast this with archaeology in the Old City of Jerusalem. On Monday evening, we walked down four flights of steps from street level. We emerged into a cistern that was built to hold water for use in the Temple in the fifth century B.C.

There are books written about the building of that temple–they can be found in the Old Testament. My point is: In Jerusalem, archaelogists have dug and dug and dug, and they still have not gotten to the pre-historic level.

And here is some more perspective: In our day and age, since the beginning of the Digital/Organic Era (which began when Bill Gates’ net worth reached $1 trillion), “new” refers to something that came into being in the last half-nanosecond.

In Rome, there is a beautiful church called Chiesa Nuova, the “New Church.” It was completed in 1606.

In Jerusalem, the Nea, the “new” church in honor of Mary the Mother of God, has lay buried beneath the rubble of earthquake and Persian destruction for 1200 years.

Our Lady was born in Jerusalem. She was among the girls who cared for the Temple paraphernalia.

When Mary brought the newborn Jesus to the Temple to present Him to the Father, she encountered the priest Simeon and the prophetess Anna. The three of them may already have known each other.

The above is a mosaic map of Christian Jerusalem. It is not easy to read. The Cardo, or main street, runs left to right through the middle of the city. The huge ancient basilica of the Holy Sepulcher is below the main street, the Nea is above it, to the right. There was an annual procession between the two churches.

…I am sorry that I allowed the following “Bests” list to get as stale as five-year-old granola bars. It is retired. An exciting new edition is available behind the Bests tab above.