This was the most exciting summer in sports I can remember.  It included the following unforgettable events: 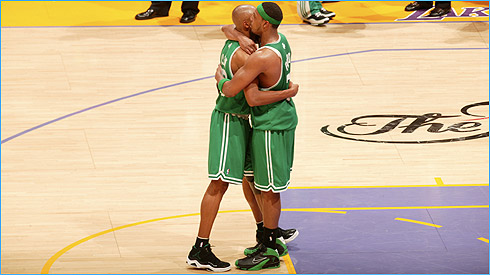 1.  The Boston Celtics second-half comeback win over the Los Angeles Lakers in Game Four of the NBA Finals on June 12.  The Celtics were down by twenty-four points at halftime—in Los Angeles.  Then their starting center Kendrick Perkins went to the locker room with a shoulder injury early in the third quarter.  And then the Celtics came back to win 97-91.

Even though the Lakers won Game Five, they were beaten after their Game Four loss at home; it was just a matter of time before the Celtics took the trophy.  (Note regarding the fickleness of the basketball fan:  I hated Kobe in June.  Kevin Garnett was my man back then.) 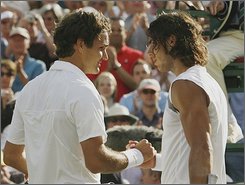 2.  The greatest Wimbledon Mens’ Final of all time on July 6.  I turned off the t.v. at about 11:05 a.m. (I had to go say Mass), figuring that Nadal had Federer’s number and would soon be through with him.  At 4:00 p.m., I turned the t.v. back to see who won—and it wasn’t over!  Federer had rallied, and they were finishing the fifth set.  Nadal certainly deserved to win, but Federer showed a level of resilience and determination not seen since the Pelopennesian Wars.

3.  The emergence of Phil Dalhausser onto the world stage.  This guy is my man!  I have never had more fun than watching Rogers and Dalhausser march to the Beach Volleyball gold.  (May-Trainor and Walsh are awesome and beautiful; Rogers is deeply impressive—but the Beijing Beast is MY MAN!)

4.  USA Basketball Redemption in an unforgettable Gold Medal game.  It was a championship game for the history books.  Our NBA-star squad played as a team with high-school-like heart.  It was enough to restore your faith in the goodness of man.  (Perhaps that is a bit of an overstatement—but here’s to hoping that the Bad Years are over.  I can even live with the arms full of tattoos now—though the sooner Dennis Rodman is altogether forgotten, the better.)  And of course now I love Kobe as if he were my own blood brother. 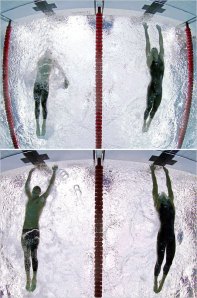 Of course, there is also the business about Michael Phelps winning eight gold medals, more than anyone has ever won at a single Olympic games.  (He did win; he definitely touched first.)

Let’s give the good Lord His due for giving us such an unforgettable summer.  We should never take His blessings for granted.  I can’t imagine He will give us another summer like it for a while.  Will He be pleased to give us a good Redskins’ season?  Will He exult or chastise Jim Zorn?  (At least Jason Taylor has no ligament damage.)  Only time will tell…