This time of year, people begin to look back and consider all the ‘big things’ that have happened in the past eleven months.

Like a change of pastor at St. Andrew’s in Roanoke–doesn’t happen every year.

A little closer to home: The shooting at Smith Mountain Lake. Frank Beamer’s retirement. Cavaliers got knocked-out early from the NCAA tournament in March…

We keep the season of Advent for many reasons. One of them is to put all these events into perspective, to put history itself into perspective. Advent does not mean maxing out the credit cards on “The Force Awakens” merchandise. Or getting into cookie-baking battles with your mother-in-law.

No: keeping Advent means something rather radical. It means an intimate sharing in the thoughts, affections, hopes, and longings of one particular group of people. The “heroes” of Advent. The prophet Isaiah. Sts. Zechariah and Elizabeth. St. John the Baptist. The three Wise Men. St. Joseph. And the Blessed Virgin Mary.

Instead of going shopping, they visited the Temple. Instead of watching tv, they memorized the Psalms. Instead of playing video games or fantasy football, they gazed at the stars in the night sky. Instead of driving hither and yon in a frenzy, the heroes and heroines of Advent patiently waited, calmly waited.

But the heroes of Advent stayed vigilant while the world around them flimmed and flammed. The prophet Isaiah witnessed events that would make our heads spin–foreign armies over-running the land, the people dispersed in exile and degradation. St. John the Baptist saw the Romans take control, wrenching power from Herod the Great’s feckless progeny. Only the Lord knows all the things that the Wise Men saw, as they journeyed west across deserts and through huge ancient cities teeming with Zoroastrians, Hindus, and Greek-speaking self-help gurus.

But, through all this, one thing, and one thing only, touched their innermost hearts. The world turned, unsteady and confused–but one single sentence made its way into the epicenter of the bosom of the Blessed Virgin Mary: “Behold. You will bear a son who will sit on the throne of David.”

The four weeks of Advent train our hearts and our minds to remember that all of history has one decisive event. One.

And He has a name.

Stay awake, “lest that day catch you like a trap.” What could ‘that day’ mean, other than when earth and heaven meet? ‘That day,’ when God opens Himself up as the temple of the city, His light shining as a perpetual sun. ‘That day,’ when truth and justice kiss, and all stolen goods get returned to their proper owners. ‘That day,’ when sick people heal, when blind people read the words of a book, and when the child and the bear cub frolic together. That day: when God and man are one. 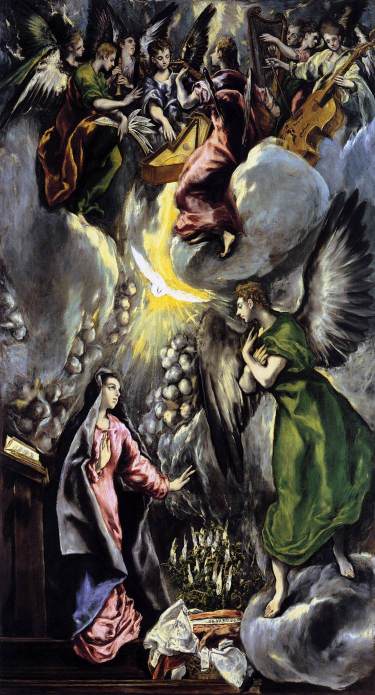 Anybody know what continent Pope Francis is on right now? Africa. He traveled to Africa to commemorate the 50th anniversary of the canonization of the Martyrs of Namugongo, in Uganda. The African martyrs were tortured and burned alive because they refused to renounce Christ. They refused to give in to unchastity and corruption. “That day” came for them, and they were ready, because they had trained their hearts to focus on what Isaiah and the Baptist and St. Joseph and Mary focused on.

Yes, He was born in humble circumstances. He never wrote a book, got interviewed on “60 Minutes,” played professional football, or won a Nobel Prize. He never had a facebook or twitter, never ran for office, never made a lot of money. Never endorsed a product, did a tv spot, or conducted any kind of PR. We’re not even sure exactly what He looked like.

But: in the list of all the things that have ever happened or ever will happen, this is The Big One.

They waited. The ancient prophets. The devout foreigners longing to know God. The just man, living for love and a future that only God could know. And the lovely young woman who had become pregnant through an act of faith. They kept quiet and waited patiently, calmly. Awaited the birth of the man, the child, the baby boy Who is God.

In the 1880’s, the king of Uganda demanded that his pages submit to his homosexual advances. The holy martyrs of Uganda, strengthened by devotion to Christ, refused. This led to a wholesale persecution in the country. The African blood that consecrated today as a Memorial was spilt 129 years ago.

Twelve years ago today, the Apostolic See of Rome published a brief “Consideration Regarding Proposals to Give Recognition to Unions between Homosexual Persons.”

The Vatican calmly foresaw that the compromises regarding ‘gay marriage,’ which were fashionable a decade ago, could never last. “Civil unions” were just a euphemism for homosexual ‘marriage.’

Pope St. John Paul II and then-Cardinal Ratzinger calmly pointed out that allowing homosexual couples to adopt children contradicts the United Nations Convention on the Rights of the Child. They re-iterated what the Catechism teaches, that it is un-Christian to treat a homosexual person unjustly. And that, like all Christians and all decent people, homosexual people are bound by the law of chastity.

Probably the most remarkable thing about the Vatican document of twelve years ago is this: It soberly acknowledges the de facto legal toleration of homosexual acts. In other words, it says: marriage is marriage; the Gospel calls us all to chastity; let’s operate discreetly and prudently to try to help people live a chaste life. Tolerance of evil, humble dedication to good.

The movement that has changed the definition of marriage in so many places since 2003: it does not have to do with tolerance. Tolerance means: accepting something regarded as evil.

The “Gay Marriage” movement regards our teaching as evil. But it has nothing to offer, really, other than intolerance of our message.