Our bishop will ordain deacons this Saturday, including two admirable young men who spent summers at our humble southwest-Virginia parishes in years past. Next year, God willing, Bishop will ordain these gentlemen to the priesthood. Theodore Cardinal McCarrick ordained me a deacon seventeen years ago yesterday. He ordained me a priest fifteen years ago next Thursday.

I bring all this up a propos of today’s feast. At Holy Mass today we commemorate the election of St. Matthias as the twelfth Apostle. As we read in Acts, after an election supervised by St. Peter, Matthias took the place vacated by Judas.

In the Collect for today’s Mass, we pray about the “college” of the Apostles. Jacob had twelve sons in the Promised Land, the founders of Israel’s twelve tribes. The new People of God, the Church of Christ, also began with a fraternity of twelve brother Apostles. Eleven can make up a soccer team (Go Mexico! in the Copa Mundial). But we needed twelve to start the Church.

In the Protestant world, people tend to think of a clergyman as a learned Bible scholar, qualified by his education and his natural talents to teach people about the Word of God. We Catholics would certainly agree that a clergyman ought to have a good theological education. And we preachers need to work constantly on our teaching skills.

But a careful reading of the New Testament shows that you cannot define a clergyman as a scholar of the Bible. Because the first Christian clergymen wrote the New Testament. The Bible as we know it now did not exist–until some of our Church’s original clergymen finished it and organized it.

No one…can proclaim the Gospel to himself… No one can give himself the mandate and the mission to proclaim the Gospel. The one sent by the Lord does not speak and act on his own authority, but by virtue of Christ’s authority; not as a member of the community, but speaking to it in the name of Christ. No one can bestow grace on himself; it must be given and offered.

It comes down to this: We have received a gift. God united the human race with Himself, in the Person of Jesus Christ. Christ gave Himself to us, and that Gift of Christ Himself comes to us, here and now, through the apostolic ministry.

This does not mean that no one can ever disagree with a single word that a deacon, priest, or bishop says. The sacrament of Holy Orders does not preserve us clergymen from the dunderheadedness that afflicts the human race in general.

The infallibility that the sacrament of Holy Orders does give us–it is actually much, much more humbling, because it is so much more exquisitely beautiful. Anyone can disagree with a priest or bishop, except when he says: I absolve you, or This is My Body and This is My Blood. That is Christ speaking, speaking infallible truth.

The living Son of God, risen from the dead, speaking now through the apostolic ministry. He could have chosen any means that He wanted, to stay close to His people through the ages—He is God, after all. He chose the Mass, the Blessed Sacrament, the silent Host.

Everyone knows that the Lord Jesus ascended into heaven forty days after He rose from the dead. And everyone knows that, as He prepared to ascend, Christ commanded His disciples to pray. Thus began the original Novena—nine days of prayer before Pentecost.

Everyone knows these things, of course. So there’s no sense in dwelling on the fact that no one knows when we celebrate the Solemnity of the Ascension anymore. 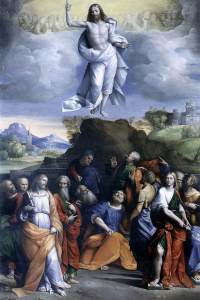 Let’s focus on the bright side. Since today isn’t the Solemnity of the Ascension (even though it is), we get to keep the Feast of St. Matthias this year!

And the Feast of St. Matthias holds special significance for the most exquisite of all sufferers, the most rarefied of all white martyrs, Washington-Capitals fans.

Because May 14 is almost always the day after the Caps get knocked out of the playoffs by either the New York Rangers or the Pittsburgh Penguins.*

The apostolate involves suffering. As St. Paul put it, those who proclaim Christ go like sheep to the slaughter. Our reward does not come in this present life, fleeting as it is, but in the great and mysterious life to come.

St. Matthias received his vocation as an apostle during the original Novena between Ascension and Pentecost. He struggled to mortify himself and his fleshly desires. For this reason, people struggling with alcoholism have revered St. Matthias as a patron. St. Matthias attained his reward when he was stoned to death by cannibals.

May his holy prayers help us to keep these days especially holy.

Peter stood up in the midst of the brothers and said, “It is necessary that one of the men who accompanied us the whole time the Lord Jesus came and went among us…become with us a witness to his resurrection.” (Acts 1:15, 21-22)

They chose St. Matthias as the twelfth. There had to be Twelve. Why?

Is it because 120 people had gathered? I mean, it is pretty interesting that the twelfth Apostle was chosen with a congregation of 120 people. One hundred twenty divided by twelve gives us the beautiful number ten. This, of course, calls to mind the fundamental moral law, the Ten… Suggestions? No. The Ten Commandments.

Did there have to be twelve Apostles because the Church is the new Israel? Israel was founded on the twelve sons of ___________ (Jacob), from whom the twelve tribes were descended. The ancient High Priest wore twelve stones on his breastplate because of this (Exodus 39:14).

We do not traffic in astrology, of course. But God did array the heavens in such a way that we could make out twelve signs in the stars over the course of a year. And the ancient wisdom of the grocer discerned that eleven does not make a complete quantity of eggs. You need a dozen. Twelve seems to fulfill the whole. Twelve gives us a complete number.

Twelve men, then—enough for a jury. But these men praying in the upper room were not angry, but ready to be clothed with power from on high.

May they guard us from their heavenly thrones. And may they help us through one of the twelve gates of the new and eternal Jerusalem.

My teams are out.

Now I have to come up with more subject matter. Yikes.

…By a strange co-inky-dink, a priest friend of mine from the Pittsburgh area is visiting this week.

Soon, he will return to the land of gleeful Penguins people. He promised that he would speak to them about our pain.

Yes, the Penguins won the series fair-and-square. But it hurts. It hurts…

…Did you know that, back in the late 19th century, the borough of Brooklyn was thick with trolley cars?

There were so many trolley car lines in Brooklyn that Manhattanites called their Brooklyn neighbors ‘trolley dodgers.’

Another question I have is: Why does Notre Dame University hold its graduation ceremony on Sunday? I thought college graduations were customarily held on Saturday, Sunday being the sabbath and a holy day…

Was St. Matthias the first to receive the sacrament of Holy Orders from someone other than Christ Himself?