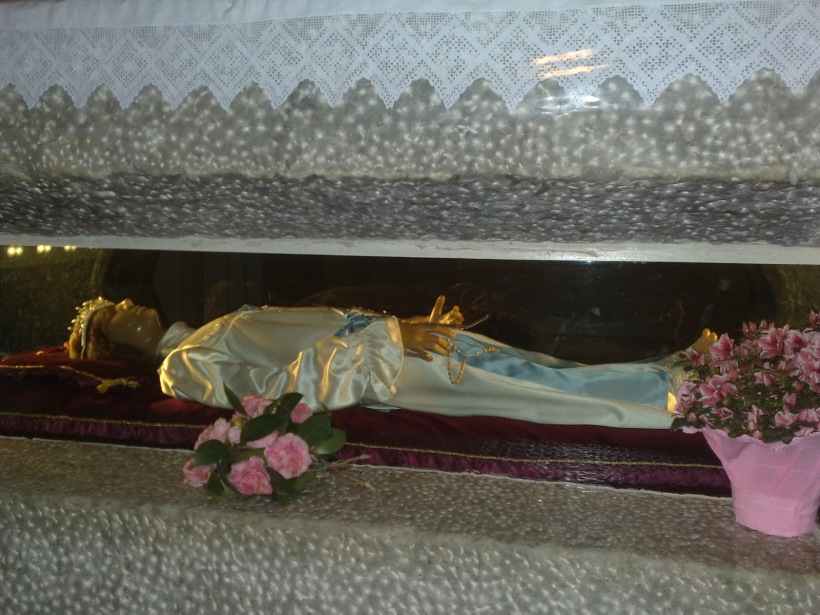 She became one of the first of the countless martyrs of the 20th century. One historian estimates that the last century saw 45 million martyrdoms, out of a total of 70 million over the whole course of the last twenty centuries. This would mean that two-thirds of all the martyrdoms that have ever occurred took place in the twentieth century. Blessed Pope John Paul II wrote, “At the end of the second millennium, the Church has once again become a Church of martyrs.”

In the first reading for today’s Mass, the prophet Amos warns of a famine. “Not a famine of bread, or thirst for water, but of hearing the Word of the Lord.”

A famine of hearing the Word of the Lord. The blood of the innumerable martyrs testifies to the fact that the last century endured just such a famine. The hard soil that did not hear God’s Word extended to many corners of the globe.

But God brings good out of evil. A lustful young man killed Maria Goretti out of willful malice. But he repented and turned to God. He attended her canonization Mass, at peace with her family.

If the twentieth century began with such a beautiful testimony to God’s all-conquering mercy, then only He can know all the good for souls that can come from the quiet suffering of so many millions of faithful Christians.

As the Lord teaches us, every faithful life bears fruit. Every earnest Christian bears witness in his or her little way. More good than we can know comes from it.

St. Maria Goretti feared sin more than death; she loved Christ more than she loved her earthly life. If we can say the same, then the famine of hearing God’s Word won’t last. We ourselves will water the soil with our faith.