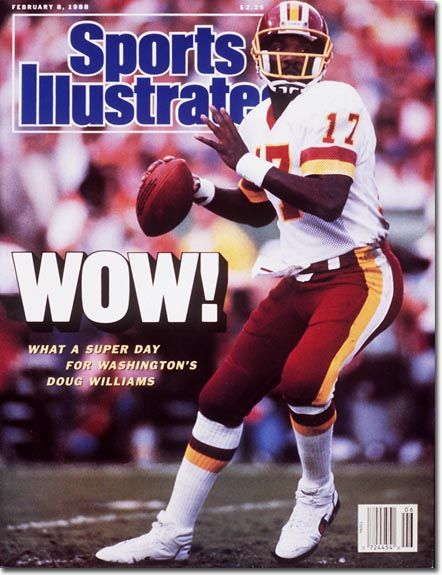 In thirteen days, Cam Newton will start at quarterback against the Denver Broncos in the Super Bowl.

But it won’t be the first time the Broncos have squared-off against a team with a black quarterback.

Two years ago, the Broncos faced Russell Wilson.  But that wasn’t the first time, either.

Long-time readers remember that, two winters ago, I had the opportunity to make a pilgrimage along the California Mission Trail.

We started in San Diego, of course, in Mission Valley, at the basilica of San Diego de Alcalá.  That particular shrine of holy martyrs lies less than a mile away from Qualcomm Stadium.

But that wasn’t your humble servant’s first trip to Mission Valley.

Qualcomm Stadium used to be known as Jack Murphy Stadium.  And on January 31, 1988, the Broncos got trounced there, in Super Bowl XXII.  By Doug Williams and the Washington Redskins.

Some of us remember that night as if it were yesterday.  Some of us even remember the balmy air in Mission Valley that night.  Your unworthy  servant, thanks to Divine Providence–and the fact that my dad, though not rich himself, associated with some seriously rich people, who had Super Bowl tickets to give away to their friends’ sons–my brother and I saw Doug Williams destroy the Broncos with our own eyes.

In Super Bowl XXII, a black quarterback led the winning team for the first time ever.  Two Super Bowls ago, it happened a second time.*   The Broncos have been on the losing end both times.