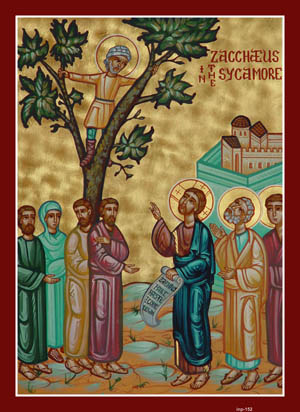 Zacchaeus wasn’t just a corrupt tax collector. He didn’t just benefit himself, and the occupying foreign power, at the expense of his own people’s sufferings. He was the chief tax collector. He served as Chairman of the Board of Exploiters. [Spanish]

I myself can hardly relate to Zacchaeus. I have never had to climb a tree to see over a crowd in my life.

But Zacchaeus did more than just swindle people. He also made prudent investments. He made some honest profits on the money he had gained dishonestly. So, when Christ called him, and Zacchaeus turned his heart to God, the notorious tax collector had enough honest money in his coffers to pay back those he had wronged, four times over.

In other words, you would have wanted someone like Zacchaeus to cheat you. Filches your money; invests it and quadruples the value; then turns honest, and gives you back the whole thing, principle and profit.

If we could be certain that our loved ones have made it all the way to heaven; if we could be sure that they are totally at peace, free of all debts to God and man, altogether reconciled to the truth; if we could know all this for sure, then we wouldn’t pray for them. Rather, we would pray to them.

On the other hand, if we had no hope whatsoever that our beloved dead could reach the goal; if we despaired of their salvation, then we wouldn’t pray for them then, either.

We pray because we hope. Death swallows us human beings up into a great darkness. But we believe that God’s light shines beyond what we can see. So it’s worth praying.

Which means that: Between the certainty that we don’t have, and the despair that we don’t feel, about our deceased loved ones getting home to God—we figure some intermediate state exists. Some temporary state between heaven and hell. What is it? Whatever it is, it must involve purification. 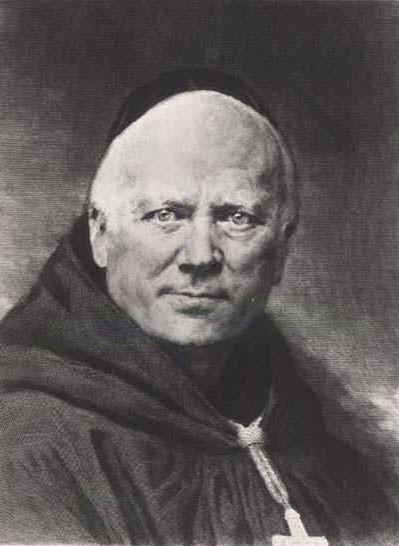 Here’s Dom Prosper Guéranger’s answer to the question, What is Purgatory?

It is a place in which souls stand in need of refreshment, for the piercing flames of purification are keenly felt. Moreover, it is a place where there is no light, so there is nothing to distract them from their fearful sufferings. Furthermore, it is a place where sweet peace reigns not; there, is ceaseless agitation, the soul striving towards God whom it may not reach; there, in direst trouble and anguish, the misery of the poor soul in having thus put herself into such straits of wailing sorrow and frightful pain. Yes, Purgatory is indeed a place the very opposite of that abode where reign endless refreshment, light, and peace. These three expressions are of the highest importance, because they reveal to us, that whenever we pray for the Dead, the succor that reaches them by our means, is always in the form of refreshment, light, and peace.

So we pray. That our beloved dead will have the refreshment, light, and peace of our prayers. And thereby make progress along the path of purification, toward the ultimate goal.

Which raises another question: How exactly does someone make progress toward heaven, after death?

What happened with Zacchaeus teaches us the answer. Zacchaeus saw God, from up in the tree. The Lord called Him closer, and of course Zacchaeus wanted to respond.

To get closer, Zacchaeus had to do two things: He had to receive mercy from God, so he could start fresh in his relationship with Him. And Zacchaeus also had to make right again all the wrong he had done, as best he could.

Now, we honest human beings acknowledge that our sins weigh heavily in the balance of justice. Who doesn’t fail in his duties in this life? Duties to family, to church, to neighbor, to the poor and vulnerable. We have a duty to the truth, to respect it completely. We fail. We have a duty to use all the material means we have to help others. We don’t. We have a duty to receive everything as a gift, and give thanks, and seek only the higher things of God. We get sidetracked.

God mercifully forgives sinners who repent and gives us a fresh start in our relationship with Him. But there’s a lot of debt to settle up. We can start while we’re still making our pilgrim way on earth. Whatever debts remain when we die, we settle in purgatory. Our time in purgatory gets shorter and easier with every prayer someone says for us, every Mass someone has offered for us, every sacrifice someone makes for us.

We hope that someone will do these things for us, when we pass on. Which means the least we can do is pray and fast and make sacrifices and have Masses said for our beloved dead. And for all the poor souls in purgatory.