Long-term readers will remember that, one year ago, Archbishop Wuerl insisted that we priests make certain points in our Sunday homily. He did it because prominent Catholic politicians had misrepresented the teaching of the Church. 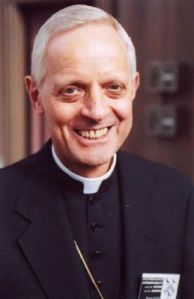 His Grace had to insist again today that we priests within the city limits make certain points.

It appears that the D.C. City Council will soon act on this matter.

Here is your humble servant’s homily for today…

“Whoever receives one child such as this in my name, receives me.” (Mark 9:37)

The Lord Jesus taught us that we must become like little children. We must depend on Him for everything, like a little child depends on his mother and father.

Children are utterly dependant on their mothers and fathers. When we human beings come into this world, we are defenseless, and we don’t know anything. We need loving care and instruction.

This is why the good Lord gave us the sacrament of Holy Matrimony. Marriage binds man and woman in the beautiful union that both produces children AND offers children the right environment to grow up in.

Archbishop Wuerl told us priests in Washington what we had to preach about today. He told us what to say.

Let me first remark that I think it is a strange day indeed when the poor Archbishop and all of us priests within the city limits have to remind everyone that you cannot have a marriage without one man and one woman.

Who would have thought that the day would come in Washington, D.C., when the Catholic Church would have to remind the leaders of the city about the basic birds and the bees? The day has arrived. We live in strange times.

The Lord Jesus has taught us to become like little children. Let us try to see things from the point-of-view of children. The way to look at the idea of “same-sex marriage” is through the eyes of a child.

There are some misguided people who claim that “gay rights” are a matter of justice, like the civil rights struggle. But that is focusing on the wrong citizens. When it comes to marriage and family life, the people with the rights are children.

Listen–forgive me. I have to say things that are as obvious as the fact that the sky is blue. Unfortunately, in these strange times, we have to insist on these things:

We do not hate gay people. It is un-Christian to treat anyone unkindly. The Lord Jesus loves everyone, including people who struggle with attraction to members of the same sex. He has a plan to get everyone to heaven. He gives everyone the strength and grace we need to do the right thing, to be chaste according to one’s state in life. God knows we all need His help to do this.

Some people will ask us: What difference does it make to you if two gay people try to get married? What does it have to do with you? Just live and let live. Be tolerant.

The question is not, Why are you Christians so concerned about this? We are not the ones trying to change a law that has stood firm since the beginning of time. The question is: Why is the Council and the mayor trying to force this unjust sacrilege on our city?

It is pointless, it is unjust, and it is a sacrilege. People wonder why we care–but we do not judge anyone. God is the judge of souls. We do not condemn anyone. We want to live in peace, with God and with each other. What we care about is: We do not want the very laws of our city to offend God.

God has given us Holy Matrimony as a sacred trust. He started it in the Garden of Eden. On the Cross, the Bridegroom of the human race turned marriage into a source of heavenly grace. All of us have been born out of this gift of God. The birds and the bees is a beautiful thing, when we live it out faithfully under the loving care of the heavenly Father.

We are not bashing anybody. The Church is the friend of every man. But we cannot stand by when something so sacred as marriage is transformed into an adolescent charade. We cannot be silent when the leaders of our city step into the public square and thumb their noses at God. No. We will make some noise about this.

It is our right to say our piece in this democracy.

We say that there is only one way to get married—the way that God invented.

One thought on “Making Some Noise in this Democracy”