The city of Jerusalem did not recognize God made man when He came. But our Lady did.

We have talked a fair amount about how genuinely difficult it was to recognize the Christ. How much faith the first believers had to have. Yes, He worked great miracles. He also walked around pretty much like you and me. And then, as we will discuss on Sunday, He got crucified. 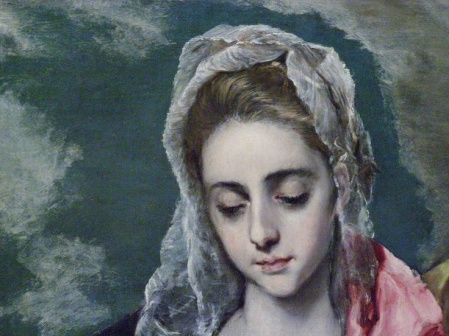 At the foot of the cross, the disbelieving Pharisees and priests scoffed at Him, along with one of the other criminals, and many of the soldiers and bystanders. Bitter and unkind, to be sure. But, at the same time, can we blame them? After all, what kind of Christ is this? A convicted blaspheming Jew, put summarily to death by cruel pagans.

They did not recognize Him. God came to visit them, in Person. He came as a lamb led to slaughter. As the Prince, not of power, but of Peace. He came with pure, divine love. Love that chose to die in sacrifice, rather than visit any wrath or vengeance. God did not get mad when they failed to welcome His visit. Instead, he died for the very people who rejected and killed Him. ‘Father, forgive them. They think I’m a blasphemer. They don’t recognize Your Eternal, Only-Begotten Son.’

Meanwhile: The Blessed Mother beheld everything exactly as it truly was. Because she never deviated one iota from her faith in what the Archangel Gabriel had told her, when the whole adventure began.

Her child is God. The wandering Nazarene rabbi was no blasphemer. He had innocence that extended to truly infinite depths within Him. She watched the innocent divine Lamb die, knowing exactly what was happening. She did not doubt that God’s will was getting fulfilled, even though it made no apparent sense.

She did not know what would happen next. But she knew that God had chosen her to live through it, exactly as it was, whatever came. Then she saw her Son again, risen from the dead.

One thought on “Homily for Our Lady’s Presentation Day”