Today we keep the anniversary of our parish patron’s death, as a Memorial. Over the weekend, we will keep it as a Solemnity, as is our prerogative to do.

As we celebrate Holy Mass to honor Saint Francis, we sing about how God has used the saints to call mankind back to our original holiness, to the innocence of the garden, before the Fall. Saint Francis’ totally Christ-like life has rescued generations of human souls from cynicism, from hopelessness, from self-centered self-destruction.

My dear mom is visiting the parish today, along with my tall and handsome brother. My mom and I have had the chance to visit Assisi. Twice. By the grace of God, many of us have been there. A trip to Assisi offers an antidote for cynicism and hopelessness, all by itself—just being there makes you feel like you’re breathing the air of the Garden of Eden. 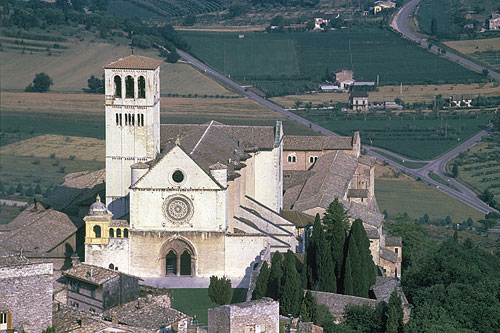 We have the first pope who ever presumed to take Saint Francis’ name. And Pope Francis presides over a Catholic Church so grievously misgoverned that there’s hardly any earthly hope for Her survival.

But Saint Francis lived in such times, too. Granted, the prelates of his age weren’t quite as worldly and corrupt as the ones we have now. Nor were the popes of the first part of the thirteenth century quite as ineffectual as the first two popes of the twenty-first century have been. We have in common with Saint Francis that one of the popes during his lifetime wanted to resign. But, in the case of Celestine III, the Cardinals wouldn’t let him quit.